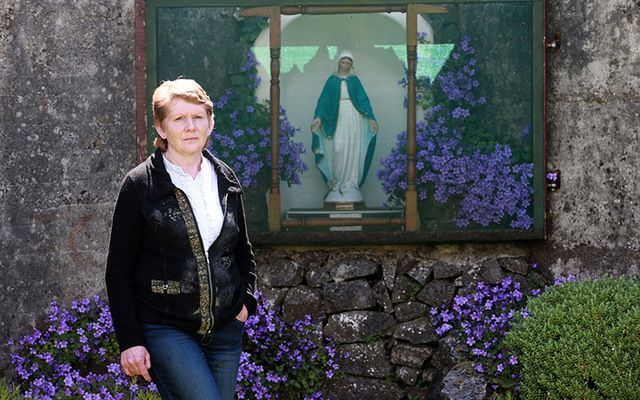 Local Tuam historian Catherine Corless, pictured beside a grotto in the grounds where the unmarked mass grave containing the remains of nearly 800 infants who died at the Bon Secours mother-and-baby home from 1925-1961 rests. Rollingnews.ie

Catherine Corless has finally told her own story.

The woman at the center of the Tuam babies scandal who uncovered the horrifying truth that up to 800 babies and young children were thrown into mass graves has revealed that her own mother was an illegitimate child, which haunted her forever.

Corless told The New York Times, which launched a massive investigation and look back at Tuam, that her mother always refused to discuss her own side of the family which hailed from County Armagh.

After her death, Catherine finally went through the birth records in her home town and discovered that her mother’s birth certificate had a blank where her father’s name should have been.

Her mother had been moved from foster home to foster home and never even told her own husband she was born outside wedlock.

When asked to discuss her family she merely said they were all dead and gone.

“That she went through her life, that she didn’t like telling us,” Catherine said. “That she was ashamed to tell us…”

Corless also revealed she has had persistent problems herself including panic and anxiety attacks when dealing with the incredible string of uncovering what had happened to 796 poor souls who vanished of the face of the earth.

“They were the children of the Devil,” recalled Kevin O’Dwyer, 67, to The Times, a retired principal who grew up just yards from the home. “We learned this in school.”

Corless says she knew what were called the Home Babies well but never understood where they had disappeared to.

After her children were grown Corless undertook her research. She explained to The Times during that period she was “all the while grappling with debilitating headaches and anxiety attacks. The episodes might last for days, with the only relief at times coming from lying on the floor, still, away from light.”

Researching she realized that “If you don’t find something, you don’t leave it. You ask why it’s not there. You use ‘why’ a lot.”

She began contributing to the the Old Tuam Society about local history, She dug deep and what she found was astounding. By the time she was finished she had changed Ireland’s view of its past and uncovered a deep dark secret. All done by one local woman in a small Irish town who decided to ask why?

Read More:Tuam Babies: “It would be... kinder to strangle these children at birth” said doctor

This from Associated Press: “A mass grave containing the remains of babies and young children has been discovered at a former Catholic orphanage in Ireland, government-appointed investigators announced Friday in a finding that offered the first conclusive proof following a historian's efforts to trace the fates of nearly 800 children who perished there.”

“A great many people are always asking what is the good of keeping these children alive? I quite agree that it would be a great deal kinder to strangle these children at birth than to put them out to nurse.” -- Doctor Ella Webb, June 18, 1924, speaking about illegitimate children in care in Ireland at the time.

The story of Doctor Webb’s comments was in the Irish Times that day in 1924. It was allowed to go without outrage or question.

Have no doubt what happened in Tuam happened in such homes all over the country. Tuam came to light because of a fearless local writer, Catherine Corless, who suspected the truth and tracked it down with forensic clarity.

Read More: Tuam mass infant grave is confirmed, now what are we going to do about it?

The same dreadful business was going on in other homes, too.

Elaine Byrne, a columnist with the Sunday Business Post in Ireland, discovered the quote above as she researched how up to 800 children were allowed to die and their bodies stuffed in a septic tank by the Bon Secours sisters in Tuam, County Galway.

Her answer is clear: it was condoned and covered up by the political, religious and medical establishment at the time.

Children and mothers under the care of the nuns at the Bon Secours Mother and Babies Home, in Tuam.

Much of Holy Catholic Ireland was a monstrous hoax. Rampant pro-abortion forces had nothing on God’s little executioners when it came to children out of wedlock. And you can’t blame just the church, the state, the medical profession who used the babies for medical experiments were all in on it.

The sin of having sex outside marriage was all encompassing. The progeny of such sex were the devil’s spawn.

One in four of the little children would die within a year of birth out of wedlock, according to available records. In Dr. Webb’s time, a commission found that: “The illegitimate child being proof of the mother’s shame is in most cases sought to be hidden at all costs…the child becomes an encumbrance on the foster mother who has no interest in keeping it alive.”

Read More: Tuam babies buried at Mother and Baby Home could be identified

Note how the baby was called "it.”

The mortality rate was 25 percent on average over the years, only seven percent for the “normal” population.

A 1935 report unearthed by Byrne states: “Doubtless the great proportion of deaths in these cases is due to congenital debility, congenital malformation and other antenatal causes traceable to the conditions associated with the unfortunate lot of the unmarried mother.

According to the state a child out of wedlock was the fault of the clearly morally and physically corrupted single mother. The official Irish state had ruled.

It is clear but for Catherine Corless that would still be the official verdict.