Tuam babies buried at Mother and Baby Home could be identified

A team of forensic experts employed to investigate the exhumation of bodies from the Tuam mass grave site to identify victims. 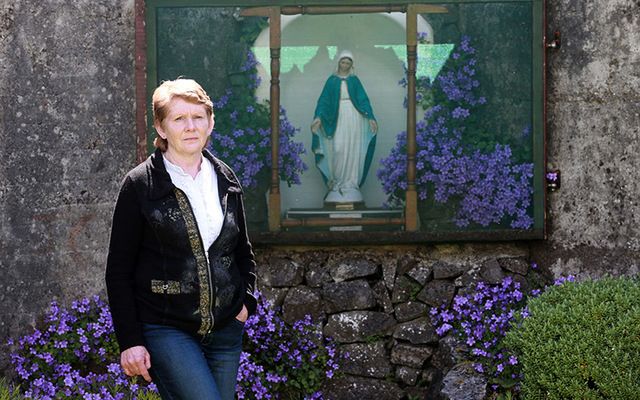 Local Tuam historian Catherine Corless, pictured beside a grotto in the grounds where the unmarked mass grave containing the remains of nearly 800 infants who died at the Bon Secours mother-and-baby home from 1925-1961 rests. RollingNews.ie

Irish Minister for Children and Youth Affairs Katherine Zappone announced that experts have been employed to assess the possibility of exhuming bodies buried at the Tuam Mother and Baby Home to identify the remains of the hundreds of babies believed to be buried there.

In an op-ed with the Irish Examiner, Zappone wrote that she felt there is a “real possibility” that the identities of these children could be discovered but that the process is “very complicated.”As such, forensic archaeologist Niamh McCullough has been appointed to lead a team of international experts to investigate the best possible next step in dealing with the Tuam babies scandal.

Thanks to the tireless work of local historian Catherine Corless, it was revealed in 2014 that the Tuam Mother and Baby home and the order of nuns in control of it maintained a practice of burying the babies who died in their care in mass graves with the revelation earlier this year that there may be as many as 800 children buried on the Tuam grounds. The children are believed to have died in the home and been buried here by nuns between 1925 and 1961.

These babies were the children of the mothers regarded as “fallen women”, those who had fallen pregnant out of wedlock or as a result of rape or incest, and were committed to the homes run nationwide by religious orders around the country.

While the McAleese inquiry investigated the treatment of women in the Magdalene Laundries and confirmed that they state was aware of the abusive manner in which they were often kept against their will and had their children taken away from them, the mother and baby homes were not considered under the remit of the investigation. As such, the victims and the survivors of the laundries were awarded a state apology in 2014, but the victims and survivors of the mother and baby homes have not heard any such apology.

As the news of the mass grave emerged this year, calls have increased for state acknowledgment of misconduct.

“As a member of Government and the only independent woman in Government, I feel a huge sense of responsibility to begin to heal the fractured trust between our citizens and our state,” writes Zappone.

Read more: How she did it: the heroic Irish historian who broke the Tuam baby home scandal

“I have visited the Tuam site on numerous occasions. I am acutely aware many people are experiencing a great deal of anxiety and anticipation about what might happen next at the site.

“Most importantly, I am determined that any action must respect the memory and dignity of the deceased children who lived their short lives in this home.”

McCullough will now lead a team of experts in juvenile osteoarchaeology, forensic anthropology, and DNA analysis to undergo a task over the coming months that has not previously been carried out anywhere in the world.

The decision on whether to exhume the bodies and identify them or to leave them as they are and to erect a memorial will be taken based on the finding of this team of experts.

"We can only do this with full knowledge, or at least as much knowledge and information as we can garner," Zappone said.

"If there is a consensus that we should recover the infant remains and try to identify them, we need to know if this is possible. We have made too many decisions in this country in the dark and we are not going to do that again in relation to Tuam."

The Minister will also invite Pablo de Greiff, the UN's special rapporteur on the promotion of truth, reparation and guarantee of non-recurrence to Ireland in the coming months, who will lead detailed consultations “focusing on those who were resident as children without their mothers in Mother and Baby Homes and County Homes.”