Tuam mass infant grave is confirmed, now what are we going to do about it?

There have been calls in the Irish press for a criminal investigation. 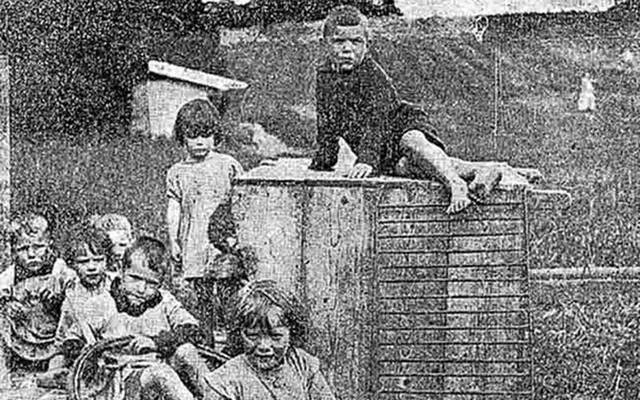 Children in Glenamaddy, in 1924, before The Home moved to Tuam, in County Galway. CONNACHT TRIBUNE

Catherine Corless wasn’t looking for validation for her claim that up to 798 children and infants could be buried in an unmarked mass grave in Tuam County Galway, but yesterday it arrived.

The commission of investigation into the Tuam Mother and Baby home confirmed to the press on Friday that they had indeed found “significant human remains,” and that those human remains after carbon testing dated from the era in which the mother and baby home had operated in the town from 1926 to 1961.

Testing also confirmed that the children studied were aged from between 35 fetal weeks up to 2 to 3 years of age.

It was validation for Corless’ relentless advocacy on behalf of the forgotten children and their families.

On RTE radio yesterday morning, Corless reminded listeners that the day was first and foremost about the families, about the survivors. Many of the deceased Tuam children had siblings, some of whom also spent time in home themselves.

Peter Mulryan and his sister Marian were born in Tuam Mother & Baby Home.

Dr James Smith of the Justice for the Magdalenes Group told IrishCentral that yesterday’s announcement was only the beginning.

“The Justice for Magdalenes research group and its partner group Adoption Rights Alliance have documented that there were roughly 180 institutions associated with the care and provision of services to unmarried mothers and their children, so the story is much wider than the Commission's’ current investigation.”

Remember: Tuam is not alone. There's also a 'Little Angels' plot in Bessborough. There's a mass grave in Roscrea. Hundreds in Castlepollard.

St. Patrick’s Home on the Navan Road in Dublin, Tuam in County Galway, and three institutions operated by the Sisters of the Sacred Heart of Jesus and Mary including Bessborough in County Cork, Sean Ross Abbey in County Tipperary and Castlepollard in County Westmeath each had Mother and Baby Homes, and each of them had high mortality rates with mother and baby burial sites at each one of those institutions.

After Tuam the Commission should expand its remit to make sure a similar investigation is conducted on the site of all the others, Smith said.

“Anomalies between the recordings of deaths and the burial of children and mothers is now a defining characteristic of these institutions, as it is of the Magdalene Laundries,” Smith explained. “We have to pursue that.”

There have been already calls in the Irish press for a criminal investigation - does Smith believe an argument can be made for that now?

“Why the site in Tuam is not being cordoned off by the Irish police today and investigated as a site where an atrocity took place, that’s a fair question. Many people are asking that question,” he replies.

Corless asked a searching question of her own on RTE on Friday. Local schoolboys found the first sets of human remains at Tuam in the 1970’s. Why, Coreless asked, did the investigation not take place then? Why did the police in Tuam not investigate? Why did the local council not? Those two young boys had been found playing with human skulls.

News of the Commission's findings came on a Friday, a day traditionally favored by governments for dropping controversial stories on newsrooms preparing for the weekend off. It was also, critics noted, the same day as the dramatic election results in Northern Ireland.

“Social media responded instantly, picking up the news and grasping its importance,” says Smith. “It's already being posted about in Spanish, French, German. And it’s right across the United States. It’s an international story.”

And sorry seems to be the hardest word ...#tuambabies pic.twitter.com/eE9UrYQqHO

As much as he finds deep fault with the inadequacy of the Bon Secours’ order’s tersely written response to the Commission's findings, Smith says we’re fooling ourselves if we think we can solely point our fingers at the nuns.

“We as a society were convenienced by the existence of these intuitions because they took care of a problem,” says Smith. “This is who we were. It’s not like we didn’t know that women went to institutions like the Tuam Mother and Baby home to give birth to a child. We viewed them as embodiments of shame.”

“It was a validation of our colonial struggle to emerge from empire. These were open secrets. It’s not like these institutions were hidden away up a dark alley where no one saw them. We colluded, we were complicit, and we were convieneiced. The question now is are we still that society today? “

On Friday the Irish government admitted that what Corless originally documented actually happened. Does the trail stop now?

these were institutions run with the full support of the state. Gardaí arrested and returned women who escaped from Magdalene laundries

“There were far more than the nuns involved,” says Smith. “What questions do the medical professions have to answer? Each of these institutions had a country council appointed medical officer who signed off on a set of biannual forms recording each and every child and their health. So it’s not that we didn’t know, we did.”

Meanwhile, earlier this week, Marie Collins, another courageous Irish woman like Corless, resigned from the Vatican commission on child abuse because she had met with so much resistance from the Vatican bureaucracy, who she said would not confront the issue of child abuse within the Catholic Church.

“The question asked by these two women is what will our political leadership do? The government can no longer say they don’t know. Today we know. What are we going to do about it?”