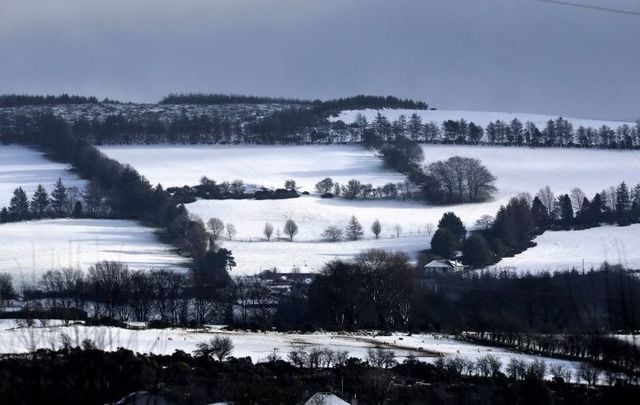 Snow in the West Wicklow hills on February 11, 2020. RollingNews.ie

Read More: More weather warnings for Ireland in the wake of Storm Ciara

Icy in parts tonight with wintry outbreaks. Some snow accumulations possible before morning, mainly across the north and on higher ground elsewhere.

Cyclonic variable winds will reach gale or strong gale force 9 tonight on all Irish coastal waters and on the Irish Sea.

Our Atlantic chart shows precipitation and pressure forecast in 6 hour intervals for the next 7 days.https://t.co/9Giuj4CR5m
The national forecast and the national outlook for the coming days can be found here.https://t.co/9gKN6SVok4 pic.twitter.com/Mi9ayqXON4

Met Éireann's meteorologists said: Storm Dennis is forecast to track to the north of Ireland and the UK over the weekend. It will likely bring periods of very wet and windy weather, with some stormy conditions possible, particularly later Sunday into Monday.

The Meteorological Situation: Cold air is forecast to exit Canada and enter the North Atlantic Ocean over the next few days, creating a sharp temperature gradient in the atmosphere. This will result in an intensification of the jet stream, shown in the graphics below, which will direct low-pressure systems towards Ireland.

Gales are likely in coastal areas on Saturday with fresh to strong winds inland. Winds could increase further on Sunday, possibly becoming stormy, particularly along western coasts. It will be very gusty too over the weekend, with some damaging gusts possible.

Flooding issues: We are entering into a period of transition between Spring (High) Tides and Neap (Low) Tides. This means there will not be a large variation between high and low tides. The combination of high seas and strong winds or perhaps stormy conditions, may increase the possibility of coastal flooding, especially along western and southern coasts due to wave transformation.

Storm Dennis may also bring very wet conditions with localized flooding possible. River levels are elevated across much of the midlands so any heavy rainfall would cause issues here.

Storm Naming: Storm Dennis is the fourth named storm of the season. The naming convention now also includes the Dutch meteorological service, KNMI as well as our existing partner UKMO. Storms are named to aid the communication of approaching severe weather, helping the public to be better placed to keep themselves, their property and businesses safe.