Storm Ciara is set to deliver "unsettled" weather across Ireland in the coming days. 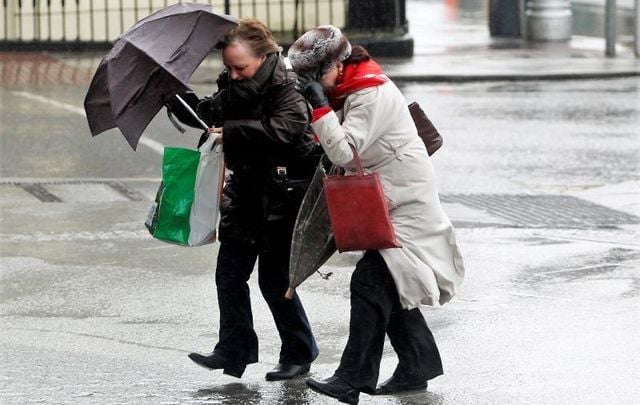 Storm Ciara is set to deliver a brutal dose of weather across Ireland this weekend which has led Met Éireann to issue two Status Yellow warnings on Thursday.

Met Éireann, Ireland’s national meteorological service, has issued both a Status Yellow rainfall warning and a Status Yellow wind warning for the whole of Ireland for this weekend.

On Sunday, “Storm Ciara (named by the UK Met Office) will produce very strong winds over Ireland on Sunday with a risk of damaging gusts.”

The weather service adds: “Over the weekend the combination of Spring Tides and high seas as well as stormy conditions will result in an elevated risk of coastal flooding especially along southern, western, and northwestern coasts.”

The Status Yellow rainfall warning will be in effect from noon on February 8 until 3 pm on February 9.

Met Éireann says for Saturday, “A spell of heavy rain will spread eastwards across the country on Saturday with 20-40mm expected, highest in the west and northwest.

For Sunday, “Another spell of heavy rain on Sunday will clear to squally wintry showers. Another 20-40mm likely."

The service adds: “A risk of localized flooding this weekend, especially over the western half of the country.”

Irish meteorologist Barra Best shared this graphic of the predicted forecast on Thursday:

This is how your weekend is shaping up, thanks to Storm Ciara. Warnings for strong winds have been issued. #StormCiara pic.twitter.com/IWc1tZhS2Z

Regarding Storm Ciara, Met Éireann meteorologists say: “Unsettled weather is expected to develop across Ireland and Northwest Europe this weekend. The change will occur as very cold air sweeps out of Canada into the North Atlantic creating a sharp temperature contrast in the atmosphere over the ocean. This temperature contrast will result in the intensification of the jet stream over the North Atlantic, which will drive vigorous areas of low pressure towards Ireland.

“After a period of rather quiet weather, the change to unsettled mobile conditions will occur during Friday (7th Feb) as wet and windy weather moves in from the Atlantic. A further spell of heavy rain is expected on Saturday (8th Feb) and this will be accompanied by strong and gusty winds with a possibility of Status Yellow warnings.

“Weather conditions are expected to deteriorate further on Sunday (9th Feb) as Storm Ciara (named by the UK Met Office on Wednesday 5th February) tracks to the north of Ireland.

"Storm Ciara is forecast to be a vigorous Atlantic storm system with an expansive wind-field.

"Numerical Weather Prediction Models project the center of the storm to track close to northern Scotland with a minimum central pressure of around 940hPa at lunchtime Sunday.

“There is a growing consensus that Sunday will be an extremely windy day across Ireland and the UK with widespread heavy rain, squally showers and with gales or storm force winds around our coasts.

“Storm Ciara is the third named storm of the season. The naming convention now also includes the Dutch meteorological service, KNMI as well as our existing partner UKMO. Storms are named to aid the communication of approaching severe weather, helping the public to be better placed to keep themselves, their property and businesses safe.

Met Éireann went on to discuss potential flooding issues across Ireland: “The country will enter a period of Spring Tides this weekend. This will coincide with high seas, which are likely to affect coastal areas at first on Saturday but will continue into Sunday and the early days of next week. The combination of high Spring Tides and high seas, as well as extremely windy or stormy conditions later in the weekend and early next week, will result in an elevated risk of coastal flooding, especially along western and southern coasts.

“The unsettled weather is likely to produce significant rainfall totals over the weekend. This will result in an increase in river levels and may cause some localized flooding.

Met Eireann encourages people across Ireland to keep up to date on weather warnings in the coming days.