Snow and ice warning issued for the whole of Ireland

Met Éireann has issued a snow and ice weather warning for the whole of Ireland as some parts of the country continue to struggle with flooding. 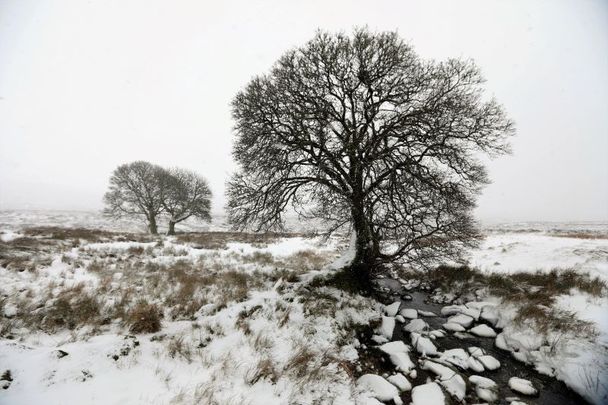 A snow and ice warning has been issued for Ireland as parts of the country struggle with flooding. RollingNews.ie

A snow and ice warning has been issued by Met Éireann for the whole of Ireland through Wednesday morning. The new warnings come as parts of Ireland are struggling with flooding.

On February 25, Met Éireann, Ireland’s national meteorological service, had two warnings in place, a snow/ice warning for the entire country, and a wind warning for counties in the southwest of the country. Later in the day on Tuesday, the weather service added a snow and ice warning for parts of the northeast effective Wednesday morning:

Wintry showers, mainly of hail and sleet, will become increasingly widespread during Tuesday leading to icy patches. Some snow accumulations will also occur.

Northwest winds will reach mean speeds of 50 to 60km/h with gusts of 90 to 100 km/h. Strongest gusts associated with showers.

Showers of hail, sleet, and snow continuing throughout Wednesday and early Thursday, leading to icy patches. Some snow accumulations over high ground.

West to Northwest winds will reach gale to strong gale force today and tonight on coasts from Hook Head to Loop Head to Rossan Point.

Westerly winds veering Northwest will reach force 6 or more at times today and tonight on coasts from Rossan Point to Fair Head to Hook Head.

Read More: Weather warnings in place in parts of Ireland ahead of Storm Dennis

The weather warnings come as Ireland has experienced higher-than-average rainfall throughout the month of February.

In a weather report for farmers issued on February 25, Met Éireann said: "There has been little respite from the rain in the last 7 days, with very wet days in large parts of the country on Wednesday 19th, Friday 21st and Saturday 22nd February. This has resulted in rainfall accumulations this week of between 2 and 5 times the normal weekly rainfalls for the time of year, with the middle third of the country worst affected.

"The wettest weather station this week was Knock Airport which recorded 98.8 mm of rain, 391% of its average. Gurteen in Co. Tipperary had 78.3 mm in the last 7 days, which is 484% of its average amount.

"The driest stations were Johnstown Castle in Co. Wexford with 40.4 mm and Roaches Point in Co. Cork, where 33.1 mm was tallied, which equates to 229% and 184% of their respective normal.

"The next few days will see wintery showers pushing in from the Atlantic from the west. As a result, forecast precipitation amounts will be above average in the western counties and the midlands, which will see 1 to 2 times the normal.

"Further away from western coasts, where these showers will struggle to penetrate such as the east and south, but combined with the persistent spell of rain expected on Friday, it is still expected that these areas will record at least the normal amounts of rainfall for the time of year.

"As river levels remain elevated and soils waterlogged any further heavy rainfalls this week will add to the risk of flooding."

Connacht Irish Farmers Association chairman Pat Murphy said: “We need one authority to set water levels on the river. Enough reports have been done. We need action on this.”

Read More: More weather warnings for Ireland in the wake of Storm Ciara

The flooding has forced Iarnród Éireann to offer bus services on affected routes:

Update: Due to rising water levels, Bus transfers remain in place until further notice between Gort - Athenry on the Limerick/Galway route. Rail services operating between Limerick - Gort and Athenry-Galway. https://t.co/E7fWIpbxl0

Drone video over the Barrow this morning. pic.twitter.com/utPMozcAes

The road to Shannon Harbour, Co Offaly. Those white things swimming across the road are swans #flooding @thejournal_ie pic.twitter.com/0hkUUfzkjr

River burst banks in #Thurles #Tipperary, property at imminent flood risk. I had contacted Tipperary County Council 2 weeks ago, warned them about the river, then I tweeted about it, but no action taken. Typical. #flooding #Ireland #ClimateChange pic.twitter.com/RzkVS03xVT

A GAA pitch completely submerged in Carrick on Shannon: