Met Éireann, Ireland's meteorological service, has warned of strong and dangerous gusts of wind as Storm Dennis continues to wreak havoc across the country. 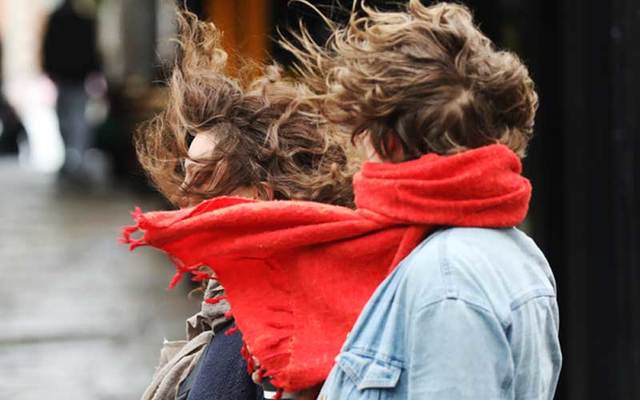 Members of the public experience strong gusts of wind from Storm Dennis, which hit Ireland this weekend. Rolling News

Met Éireann, Ireland's meteorological service, has warned of strong and dangerous gusts of wind as Storm Dennis continues to wreak havoc across the country.

The winds will bring high waves and the risk of flooding in coastal areas of Ireland.

Met Éireann has upgraded its warning to Status Orange in nine counties on the west coast. A Status Orange Weather Warning is the second highest weather alert sent out by Met Éireann.

Read more: Weather warnings in place in parts of Ireland ahead of Storm Dennis

Winds of over 70 miles an hour are forecast in exposed areas and ferry services from the west of Ireland are expected to be canceled on Sunday afternoon.

Consequently, the Irish Coast Guard is calling for people to stay away from exposed coastlines and to avoid swimming in the sea.

Met Éireann, the Gardaí and the Road Safety Authority are advising motorists to drive slowly and to proceed with caution in the worst affected areas.

Internal flights from Dublin to Donegal have already been canceled due to high winds.

A slew of hurling matches across the country have also been called off for Sunday afternoon because of the winds.

The storm left 3,000 Irish homes without power on Saturday evening and Dublin Airport said that a small number of flights were canceled.

Read more: More weather warnings for Ireland in the wake of Storm Ciara

Irish Ferries, meanwhile, said that a significant number of sailings between Dublin and the Welsh port of Hollyhead were canceled because of the storm.

RTÉ also had to abandon its coverage of a local soccer match between Shamrock Rovers and Bohemians due to inclement weather conditions and the danger they posed to TV crews.