Vin Scully, the longtime broadcaster for the Los Angeles Dodgers, once credited a visit to the Blarney Stone as the "secret" behind his success. 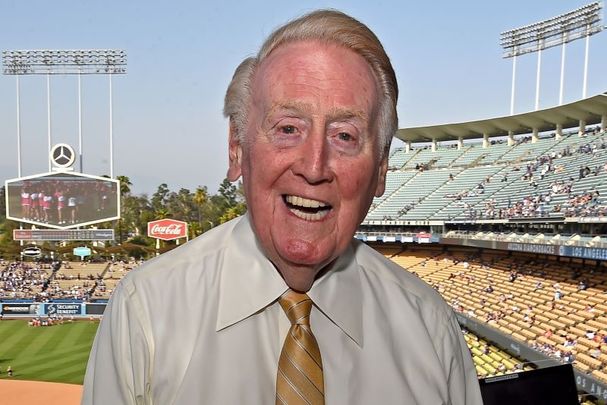 Vin Scully, the longtime announcer for the Los Angeles Dodgers baseball team, passed away yesterday, August 2, at the age of 94.

The beloved sportscaster once credited a visit to the Blarney Stone in Co Cork in his youth for his famous ‘gift of the gab.’

Born in the Bronx, New York in 1927, Scully and his mother Bridget returned to her native Co Cavan in 1932 for a short period following the death of Vin’s father.

In 2016, after he announced his retirement, Scully chatted on ESPN Radio's Dan Lebatard show when he was asked what the "secret" was behind his eloquence.

“Tongue-in-cheek, I can tell you when I was a small boy, about five, my father had died, my mother took me back to Ireland, and I actually kissed the Blarney Stone," Scully said.

“There’s an old legend about that stone that if you kiss it, it would help you in speaking. So, tongue-in-cheek, I’d say perhaps it’s that.

Elsewhere, Scully recalled that when he and his mother landed in Dublin in 1932, they arrived just in time for the 31st International Eucharistic Congress where a huge majority of Ireland attended a mass in Phoenix Park held by Cardinal Lorenzo Lauri.

"They were saying mass in the streets in Dublin," Scully told NBC Los Angeles in 2016. "My father had died and I guess I was not quite five, so my mother, heartbroken, brought me back home and we spent quite a bit of time not only in Ballyconnell [the birthplace of his mother], but out on the farms wherever the family was."

Not only did Scully pick up the 'gift of the gab' in Ireland, but his mother claims he picked up a distinct Irish lilt during their shortlived visit.

"She told me later that when we came back, I had a brogue you could cut with a knife," Scully once recalled.

Scully was raised in the Washington Heights section of Manhattan and graduated from Fordham University where he helped found WFUV, the university's radio station that features Irish programming on the weekends now.

Scully admitted that he was "terrified" to call his first game, but the fear must have subsided as his career went to span nearly seven decades from 1950 to 2016. He picked up several awards along the way, including a Sports Lifetime Achievement Award in 1995, a Presidential Medal of Freedom in 2016, and an ESPY Icon Award in 2017.

On October 2, 2016, Scully closed his final Dodgers broadcast: “You and I have been friends for a long time, but I know in my heart that I’ve always needed you more than you’ve ever needed me, and I’ll miss our time together more than I can say. But you know what? There will be a new day and eventually a new year. And when the upcoming winter gives way to spring, rest assured, once again it will be ‘time for Dodger baseball.’

"So this is Vin Scully wishing you a very pleasant good afternoon, wherever you may be.”