The USGAA, which issued fines to clubs that opted not to travel during the COVID surge, is being accused by some member clubs of prioritizing revenues over health. 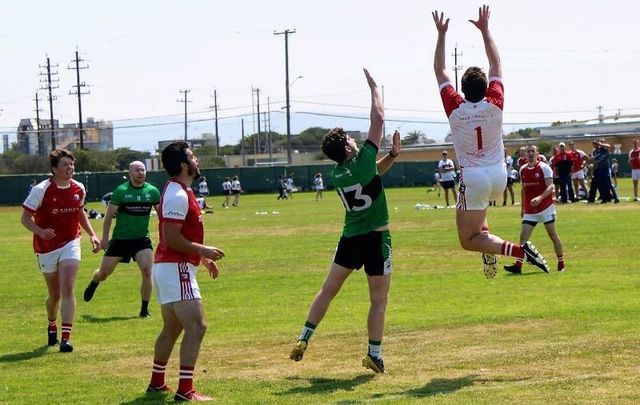 GAA clubs in the US are speaking out against the USGAA County Board after it levied fines against 20 clubs who chose not to travel across the country in August due to COVID concerns.

The issue has come to the forefront this week just days before the annual USGAA Convention, which is being held this weekend.

Mike Nash, Secretary for the USGAA Western Division and San Francisco GAA, issued a statement on November 8 that explains how 20 USGAA clubs opted not to travel to the 2021 USGAA Finals near Boston, Massachusetts in August citing COVID concerns.

According to USGAA’s 2021 bye-laws regarding the general rules of playoffs, “A club that fails to travel for a return game as scheduled in Divisional competition shall pay the greater of (1) a $2,500 fine or (2) all verifiable expenses incurred by the opposing club for the first game.” The penalty is 48 weeks suspension or until the fine has been paid.

The clubs now facing fines had informed the USGAA County Board of their decision not to travel months ahead of the scheduled games, according to the statement.

“Despite the pandemic concerns and adequate notice, the USGAA County Board chose to levy nearly $20,000 in fines on 20 clubs and informed the clubs that there would be no hearings or ability to appeal the decision," the statement says.

The penalized clubs were also set to be barred from nominating candidates for board positions at this weekend's Convention, but Nash confirmed with IrishCentral on Thursday night that they have been given their voting rights back.

Nash said that he nor the other clubs have received an update regarding the fines, but he has learned that Croke Park, the GAA headquarters in Dublin, are hopeful that all parties will come together over the weekend for meaningful discussions.

“The USGAA Board is punishing clubs for prioritizing the health and safety of their members," Bertie Penny, Chairperson of the USGAA Western Division, said in Monday's statement.

“For many clubs on the West Coast, a trip to Boston is the same distance as a Dublin GAA team traveling to New York. It is unacceptable for a volunteer organization to prioritize revenues over the health, safety, and well-being of its members.”

Paul McGarry, Chair of the USGAA Northwest Division, further said: “Safety must always be the number one priority for all clubs.

“The USGAA Board is failing to set an example for the organization, further evidenced by their refusal to accommodate remote voting or publish COVID protocols for the 2021 Convention."

The USGAA  is the governing body responsible for promoting the sports of Hurling and Gaelic Football in the United States (except for in New York City).

USGAA says there are over 130 adult and youth clubs in about 50 cities across the US under its administration. Clubs participate in Divisional Championship competitions to qualify for the National Finals in their respective sport and grade of competition.

After not holding the annual National Finals in 2020, the event returned in August 2021, this time in Canton, Massachusetts. Men’s and Ladies Football, Hurling, and Camogie competed for 17 championship titles over three days.