The GAA's All-Ireland Senior Football Championship will continue to revolve around the provincial championships and qualifiers. 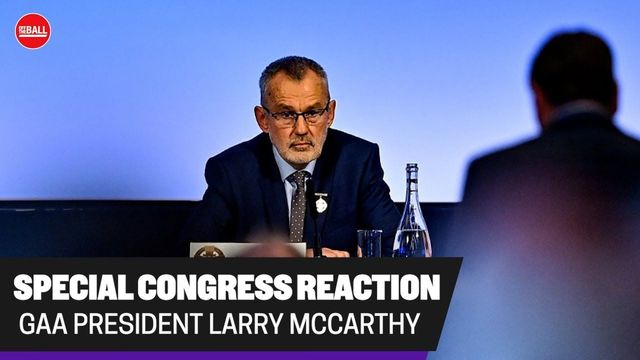 Plans to transform the All-Ireland Senior Football Championship are back on hold after Saturday’s special congress voted in favor of Proposal B, but not by enough votes to see it come into effect for 2022.

It now appears likely that the 2022 All-Ireland SFC will continue to revolve around the provincial championships and qualifiers, followed by traditional quarterfinals and the Tailteann Cup for weaker counties.

The favored Proposal B option, that the SFC moves to a league-based structure, did receive just over 50 percent of votes on Saturday, but was still short of the 60 percent needed to see it passed. Now GAA President Larry McCarthy has promised another review, possibly before congress early next year, but many pundits are split on the result of this first vote.

Kerry legend and RTE panelist Pat Spillane for example believes the right decision was made on Saturday and that Proposal B needs adjusting before it becomes a reality.

Spillane said, “I thought the decision was a correct one. It’s clear after yesterday that a majority accept that the GAA championship isn’t fit for purpose. It’s not working and we need to revamp the championship.

“It needs to be more competitive, we need more meaningful games for weaker counties, we must breathe life into it, and if at all possible we need to close that gap between the weaker counties and the stronger counties.

“Option A was never a runner. Option B gave you the choice of choosing between the lesser of two evils but it had too many flaws; it wasn’t the ideal solution.

“The task force brought in these recommendations two years ago and an awful lot of water has gone under the bridge since then. We now have the split season of club and county which has been brilliant.

“Covid has also had a huge impact, particularly financially. There was no proper cost-benefit analysis of Proposal B. The other big problem was that overnight you were getting rid of the provincial championships, and the power of the provincial councils.

“Yes, they would have existed but really only as a pre-season tournament before the league. The link between them and championship was gone and that was fatal. The idea of lower-ranked Division 1 teams losing out on a place in the knockout stages while a team ranked 17th or 25th in the league would go through, there were just too many flaws.

“Let’s be realistic, society is very unequal. Communism and socialism were great ideas, that everybody should have equality, but they failed. Sport is a mirror image of society, where there’s strong and weak, big and small. No matter what system you bring in, you’re still going to get hammerings.”

Spillane has called on the GAA to overhaul Proposal B before it goes before the electorate again. He added, “We need a task force with the really bright, progressive people in the GAA who have no agenda.

“We need to come up with that plan by Christmas and have two months of a roadshow selling it to the counties in Ireland. Then hold a full congress. We need change. What we have isn’t working. Let’s not kick that can down the road any further, and let’s act quickly.

“I like the idea of a league format. Weaker counties need to improve. They need more games. They will only improve playing better sides.

“All 31 counties, as well as New York and London, who are involved in the football championship should have a chance to win that competition. You might play a round-robin of the weaker counties, and that would then feed into the latter stages of the championship.

“If you look at the hurling championship, and its tiers, the same weak counties are still weak. Every so often a Laois or a Westmeath comes up and plays in the top-level championship, but you saw this year that they got ferocious hammerings.

“So we need a tiered structure. We need a top 16 and a bottom 16. The weaker counties need more games against each other, but they also need meaningful games against stronger counties so that they can improve.”

Like Spillane, Gaelic Players Association Tom Parsons has called for Proposal B to be revamped and wants it done in time for Congress in February.

Former Mayo player Parsons said, “I think it is a tweaking exercise. There is no reason why that can’t be taken and tweaked and brought back in February as a separate motion but similar spirit.

“We’ll be starting that process very soon. Change will never be perfect and people will need to accept that what is brought to the table will never 100 percent facilitate everyone’s hopes and aspirations, and that does need to be realized.

“I’m absolutely optimistic that change will be brought back and be on the table in February, that we will shift that dial from 50.4 percent to 60 percent. Don’t tell me we can’t come back next February with a stronger proposal.

“We’ve got a proposal that got the majority today, that sparked huge interest and conversation. It is the foundation to something. Not all that work is undone because it didn’t pass today.”

Speaking to the GAA.ie official website after Saturday’s vote, GAA President McCarthy expressed confidence that championship changes will be back on the GAA’s agenda soon, but maybe not in time for congress.

“Having said during the week that I hoped we’d be bold, based on the result, for me, we weren’t bold enough in terms of it didn’t pass,” McCarthy told GAA.ie. “But having said that we’re looking forward to a pretty altered landscape anyway for the championship in 2022.

“But, yeah, I would have liked to have seen it pass. I expect that we will revisit this very, very quickly. I’m not so sure we’ll have something for annual congress in February but there’s a majority for change and every speaker said they’d like change. In a lot of cases it just wasn’t the change that was proposed, but there’s certainly a mandate there for change.

“We will contemplate and see how we will bring forward some alternatives in terms of the options that are put on the table. I think everyone who spoke against it prefaced their remark by saying we want change, we just don’t like this change.”

“It just ended up where Henry ended up in the job. He’s got a great bunch of players and best of luck to him.”