Two US veterans fined in Dublin for protest at Shannon Airport

US veterans Tarak Kauff and Kenneth Mayers, members of the anti-war organization Veterans for Peace, were fined in Dublin for their 2019 protest at Shannon Airport in Co Clare. 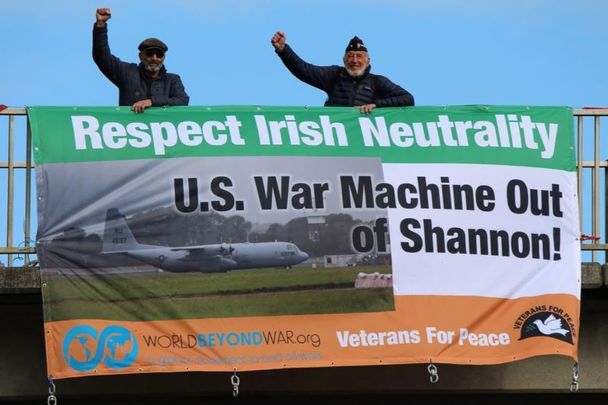 US veterans Tarak Kauff, 80, and Kenneth Mayers, 85, received a mixed verdict in Dublin on Tuesday stemming from charges handed to them after they staged a protest at Shannon Airport in Co Clare on March 17, St. Patrick's Day, 2019.

The two men, both facing the same charges, were found not guilty of the charges of criminal damage and trespass with intent to commit an offense.

However, by a vote of 10-2, they were both found guilty of interfering with the operation, management, and safety of an airport.

Both men had pleaded not guilty to the charges.

“The only thing we are guilty of is not doing more in the cause of peace," Kauff said on Tuesday.

The two men surrendered their American passports on Tuesday after the verdicts came down and were sentenced on Wednesday morning.

Judge Patricia Ryan ultimately imposed a fine of €10,000 - €5,000 each. Judge Ryan noted that both men have already lodged €2,500 as a condition of their bail and requested that a further €2,500 each be lodged as soon as possible.

Mayers, a US Marine Corps officer from 1958 to 1978, said on Wednesday: “Our justified peace actions at Shannon Airport were just one of many such peace actions by us and many other peace activists around the world.

"These actions are like the drops of water that gradually created the Grand Canyon in our home country.”

Kauff, a paratrooper in the US Army from 1958 to 1961, said: “Our purpose was in our own way, to put the government and the US military on trial for killing people, destroying the environment, and betraying the Irish people’s concept of their own neutrality.

"US war-making is literally destroying this planet, and I don’t want to be silent about it.”

On March 17, 2019, the two men, members of the Veterans for Peace organization, went onto the Shannon Airport airfield to "inspect any aircraft associated with the US military that was at the airport."

Both men admitted during the trial that they made an opening in the fence at Shannon Airport and entered the airport lands on the day in question.

On the day of their protest, there were US military aircraft at Shannon Airport which the men "believed carried troops and weapons through the airport on their way to illegal wars in the Middle East, in violation of Irish neutrality and international law."

Posted by Veterans For Peace Ireland on Sunday, March 17, 2019

Shannon Airport shut down for about 40 minutes due to the incident and the two men were arrested.

Mayers, from New Mexico, and Kauff, from New York, were detained for 13 days before being released on bail. However, as part of their bail conditions, they had to surrender their passports. The two remained in Ireland for about eight months; it took a high court intervention for them to have their passports returned.

During the trial last week, Richard Moloney, a former police fire officer at Shannon Airport, remarked that the men were "the nicest and most courteous protesters I ever met in my 19 years in Shannon Airport.”

Similarly, Garda Pat Keating, who was in charge of Shannon garda station in Co Clare on the day of the men’s arrest, told the court that the two men were “the best custodians I’ve had in 25 years."