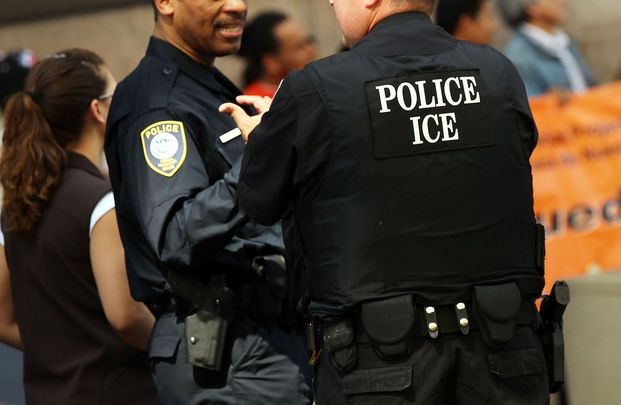 The U.S. Immigration and Customs Enforcement (ICE) plans to launch a six-week "Citizen Academy" course on immigration enforcement. The "Enforcement and Removal Operations (ERO) Citizens Academy" is set to run in September.

Immigration groups such as The St. Louis Inter-Faith Committee on Latin America (IFCLA), in Chicago, are speaking out about the planned course.

On their site, they published a letter, from Robert Guadian, director of the ICE Chicago field office, inviting the public to take part in the course. It reads: "You have been identified as a valued member of the community who may have interest in participating in the inaugural class of the U.S. Immigration and Customs Enforcement Enforcement and Removal Operations (ERO) Chicago Citizens Academy."

He notes that this program is "the first of its kind" and will "serve as a pilot for nationwide implementation." The course will include a number of "facets and responsibilities of ICE/ERO operations." Included in the training is "defensive tactics, firearms familiarization, and targeted arrests."

He added that the training would be "scenario-based" and would be "conducted in a safe and positive environment."

They added "Our tax dollars should not be spent on this hatred - especially not when a global pandemic continues to devastate our communities. Immigrants are our neighbors, friends, family, coworkers, and classmates. This blatant endorsement of white supremacy coded in a false display of patriotism seeks to excuse racial profiling and will only lead to increased violence, hatred, and xenophobia in our communities."

Chicago Representative Jesús 'Chuy' García [D-IL] told the Daily Mail he wonders if this course is part of ICE's plan to have neighbors spy on each other. The Congressman is working with the immigrant community and other advocacy groups to address the course.

"Is this a recruitment tool to surveil and have people, neighbors surveil their neighbors to see who might be undocumented in their neighborhood, their community?" García said.

"Is this an effort to expand the reach of ICE? Does this advance the thrust of criminalizing immigrants and is it going to appeal to conservative types or right-wing types to connect with a police enforcement agency here to target immigrants?"

Read more: Irish students in the US may be forced home due to new ICE rule

"It's no secret that this administration is interested in ways that they can use their agencies and use their agencies' resources to sow anti-immigrant sentiment and hatred and racism in communities,' said National Immigrant Justice Center's executive director, Heidi Altman in an interview with DailyMail.com. 'That is becoming more and more probable as we get closer to the election."

In a statement released to Newsweek, ICE spokesperson Nicole Alberico said the academy was "an extension of the community relations work ICE is already doing in the community."

"The goal is to build bridges with the community by offering a day-in-the-life perspective of a federal law enforcement agency."

Alberico explained that this Citizen Academy is based on other courses (academies) run by Homeland Security Investigations and the FBI.

In an official statement, ICE said "The Citizen's Academy is an opportunity for the community to get a transparent, insider's view of ICE's immigration enforcement operations."