UNICEF uses Ireland to highlight the fact that only 7% of people living in low-income countries have received their first dose of the COVID-19 vaccine. 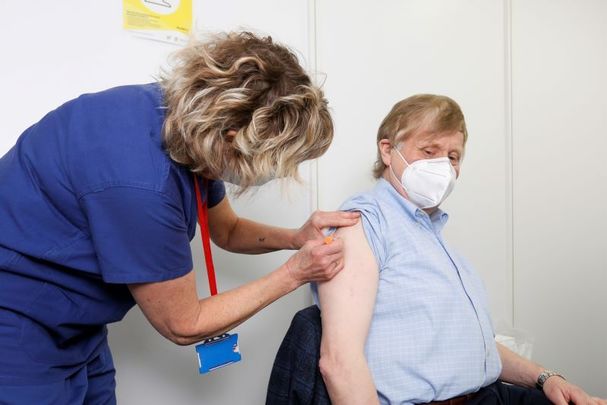 A Covid vaccine being administered at the Aviva Stadium in Dublin, April 2021. RollingNews.ie

In a bid to deliver vaccines to some of the world's most vulnerable countries, UNICEF brought the stark reality of the global vaccine effort to the streets of Ireland.

Right now, only 7% of people living in low-income countries have received their first dose of the COVID-19 vaccine.

To highlight how under-vaccinated some countries are, UNICEF Ireland drove across Ireland, comparing the vaccination rates of countries, like Syria and Uganda, with the population of the Irish counties, cities, and towns it drove through.

During their travels, they made stark comparisons, such as:

The message was clear. There is so much left to do around the world to make sure everyone gets access to life-saving COVID-19 vaccines.

UNICEF Ireland Ambassadors Donncha O’Callaghan and Joe Canning also showed their support for the campaign during the campaign’s time in Cork and Galway respectively.

O’Callaghan said: “When you see the low numbers in some countries, and you realise it would be like us only vaccinating Cork in Ireland - it really hits home. We are so lucky. All of us in Ireland have had the choice to get vaccinated to protect ourselves and our families.

"But there are so many people around the world who don’t have access. And it is a matter of luck. It comes down to where you live. When I think about that, I just think we need to support them, however we can. We need to be by their side. For me, it is as simple as, if we get vaccines, everyone should."

"The idea that people in countries already facing the biggest challenges, from conflict, poverty or other issues, are now at greatest risk of COVID-19 is simply not fair. And people in Ireland get that. That is why I’m so passionate about the campaign to vaccinate the world, and I hope everyone will continue to get behind it this Christmas.”

The COVID vaccine rollout hasn't been fair for everyone.

To highlight the problem around COVID numbers, we took some alarming stats to the counties, cities and towns of Ireland.#GiveCovidTheJab pic.twitter.com/VnEN6cQMMk

COVID-19 vaccines have given Ireland a critical buffer against the worst impacts of the virus, however, according to UNICEF, the risk remains high for billions of people around the world. That’s why UNICEF is working to deliver 3 billion COVID-19 vaccines to the most vulnerable families, health workers, and high-risk people on our planet.

UNICEF Ireland's Executive Director Peter Power said it was important to bring the numbers out into the open to draw attention to the stark differences and help end the pandemic.

“Bringing the pandemic under control is the absolute priority, but we cannot end a global pandemic one country at a time. It is not right that people in lower-income countries must wait months for access to COVID-19 vaccine doses. The more opportunities the virus has to spread anywhere in the world, the more chances it has to mutate, allowing new variants to emerge. We are seeing that now, and it is another stark reminder that no one is safe, until we are all safe,” he said.

You can donate to UNICEF's Covid vaccine Christmas appeal here.