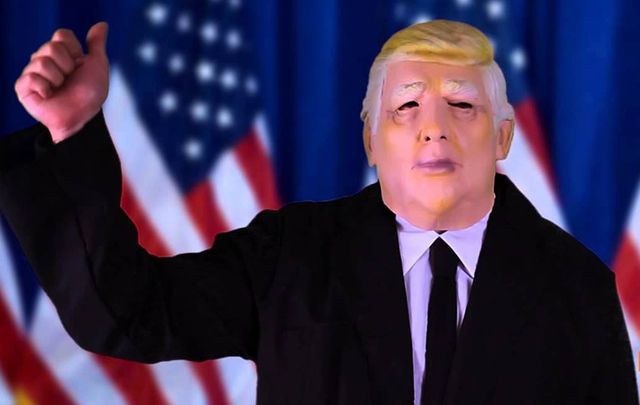 An Irish veterinary surgeon who showed up for work wearing a Donald Trump mask and allegedly threatened a co-worker with a “Trump thump” the day after the American election has appealed his firing.

Doctor Declan Gill from Limerick was one of the vets charged with overseeing conditions in a meat plant in Roscrea, County Tipperary but has now been removed from the job.

His lawyer Mairead McKenna said he wore the Trump mask as a joke the day after the American election on November 9 of last year.

She said he met the plant’s human resources manager Tony Delaney and gave him a Donald Trump “thump” as a joke.

Delaney has a different account of the incident. He alleges Dr. Gill approached him with the Trump mask on and threatened him with a closed fist and said the words ”You're dead” through the mask which he found very intimidating.

After the incident the meat plant owners sought to have Dr. Gill removed from his job and he was let go in February.

Gill was fighting the dismissal and seeking the right to appeal the case in a court of law. Dr. Gill said he wore the mask as a joke and that he had worn one of President Obama after he won and no one took exception.

There has been work related problems before with Dr. Gill and the plant after he took leave of absence following an injury which Tony Delaney, the man he allegedly threatened, accused him of exaggerating.

The judge ruled in Dr. Gill's favor and gave him the right to appeal his dismissal and ordered he get his job back pending the court verdict.