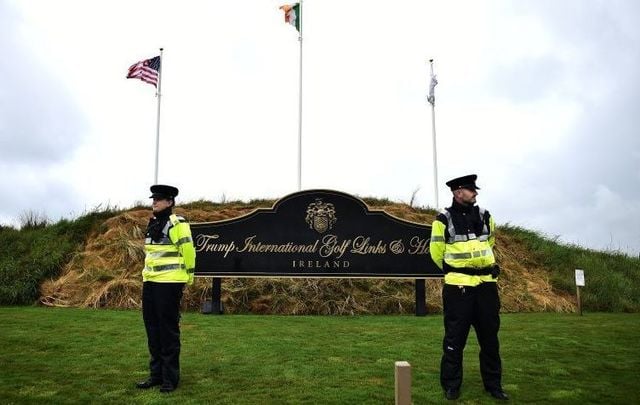 Trump's Irish golf resort in Doonbeg, Co Clare charged Irish police over €100k as they worked overtime during President Trump's visit to the property in June.

On October 19, David Fahrenthold, a reporter with The Washington Post who says he “covers President Trump's businesses and conflicts of interest," tweeted:

When @realdonaldtrump visited his Irish resort, it required a huge contingent of Irish police, who bought their food from...Trump. Irish govt paid Trump $15k just for their snacks!! https://t.co/3iC7NvSKGS

Read More: President Trump is beloved in this Irish town he saved from financial disaster

On October 23, Fahrenthold followed up by sharing pictures of the bill received by An Garda Síochána (Ireland's National Police Force) from Trump International Golf Links and Hotel in Doonbeg:

When @realdonaldtrump made a side trip to his Irish golf club this summer, dozens of Irish cops were sent to protect him. Then Trump’s company charged the cops more than $100K for food and coffee.
Here’s the bill: pic.twitter.com/y9jWDPgM9s

The itemized bill was dated from June 6 and included a stamp from the Gardai finance office that was dated June 20. The two-page bill features mainly meals, snacks, and room stay charges incurred between June 3 and June 7.

Fahrenthold, who pointed out that the figures were first reported upon by Gordon Deegan of The Irish Times, noted that one charge of €875 ($973) was for "additional tea and coffee due to inclement weather:"

The great @gordondeeg had this number earlier, but I hadn't seen the itemized bill. Look at the charge I highlighted: the weather was bad, so the cops needed extra coffee and tea. The charge: 875 euros! That must have been a lot of coffee. https://t.co/59n6y0fF7M