Trinity College in Dublin is set to embark on a new project - “Unlocking Nature’s Pharmacy from Bogland Species” - after receiving significant funding. 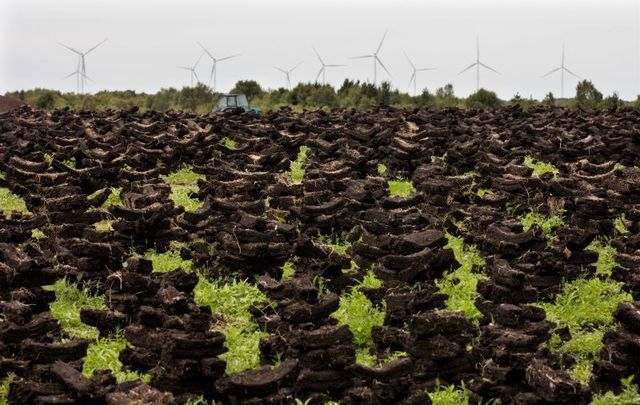 July 7, 2019: Saved turf (peat) drying out on the Bog of Allen in County Kildare, while in the background, the wind turbines at Mount Lucas are visible. RollingNews.ie

Trinity College announced on November 10 that it received significant funding to pursue an innovative, ground-breaking project to harness the untapped pharmaceutical potential of Ireland’s historic boglands.

The project - “Unlocking Nature’s Pharmacy from Bogland Species” - is focused on identifying the potential therapeutic and commercial uses of native Irish bog plants, distinctive bog waters, and the microbiome of unique bogland species.

The discovery and sustainable production of which would be of enormous social, cultural, and economic significance to the local regions and the country.

This exploratory interdisciplinary and multidisciplinary project led by Dr. Helen Sheridan, Associate Professor of Pharmacy and Pharmaceutical Sciences, Director of NatPro Centre for Natural Products Research and Fellow of Trinity College was awarded €6 million in funding from the IIP programme at the Department of Justice.

Dr. Sheridan said: “The general public are aware of the threat to the world’s rainforests, the reduction of biodiversity and the potential disappearance of undiscovered medicines and natural molecules. This same threat to biodiversity applies in Ireland, particularly to our boglands, which constitute an enormous natural national resource and heritage.”

“These ancient, rich, and fertile landscapes are sole custodians of a varied and unique biodiversity that has accumulated over many millions of years, as species evolved in these distinct environments.  Compellingly, a number of these plants have historic documented use in Irish Traditional Medicine for a variety of preventative and therapeutic indications.”

“We are at the beginning of an incredibly exciting journey. We have the opportunity to apply the lens of modern science to ancient tradition, and to transform those learnings into future scientific practice, all through the exploration of this fertile uncharted territory in our own backyard.

Combining phytochemical, metabolomic, molecular biology, and botanical approaches, researchers will identify key chemical entities or compounds with activity that can then be targeted at priority health areas of unmet need including inflammatory, auto-immune, viral, and neurodegenerative disease.

In addition, the project will aim to identify natural insect repellent and pest control solutions (for diseases such as - Malaria, Chagas disease, Zika virus) and commercial products in the healthcare and wellbeing sectors.

The research project, which is taking place at a time when industry based on natural products is flourishing in Ireland, will have profound socio-cultural and economic impact:

Dr. Sheridan’s global reputation as an organic chemist and key opinion leader in the field of Natural Products, combined with the establishment of this research project, has enabled the foundation of the NatPro Centre for Natural Product Research at Trinity College, with expertise which will guide identification and commercialisation of products that can, in turn, be fed back at community level to empower enterprise in bogland areas.

Dr. Sheridan said: “We have an opportunity here to create a centre for international excellence that gathers and applies the unique learning available in our national environment.

“Our findings will enable us to publicly communicate the importance of the bogland ecosystem as a source of novel scientific exploration internationally, as well as driving significant national cultural, social, and economic impact."