How can we be certain that Ireland’s bog bodies were the result of human sacrifice? 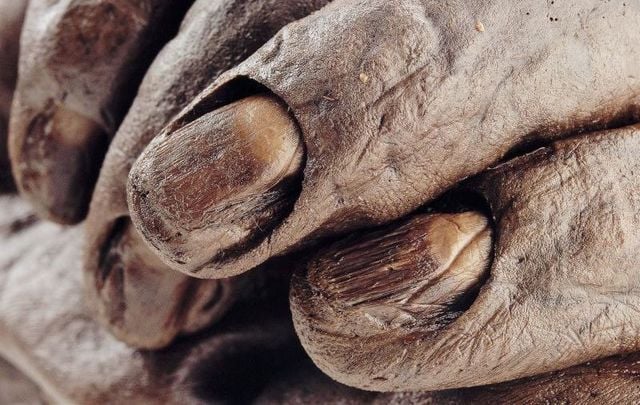 An up-close picture of Old Croghan Man, a bog body that was discovered in Ireland. RollingNews.ie

Experts tell of ancient Irish kings' violent and gruesome deaths but what is the truth behind these amazingly well-preserved bog bodies housed in this Dublin museum.

The first time I took my sons to the National Museum of Archaeology in Dublin. It was a great success; they were amazed by the hordes of ancient gold, fascinated by the Viking swords and longship, but what excited us all the most was the exhibition entitled 'Kingship and Sacrifice'.

This display hosts several prehistoric bodies pulled from Ireland's peat bogs, and other items plumbed from the depths which may or may not be associated with them, such as gold jewelry, headdresses, weapons, eating utensils, and items concerned with corn and milk production. When the Irish decide to do something with their archaeology, it has to be said, they do it very well indeed.

The mood is somber, respectful; the lighting subdued. The prehistoric past of Ireland's Kings is conjured up before our eyes with imagination and artistry, whilst we gaze with wonder into the faces of real people who lived and breathed, and loved and died thousands of years before us. It's a spectacular and unforgettable experience.

But how were they so well preserved? Well, it's all down to the unique habitat of the Irish bog.

The word 'bog' is derived from the Irish word bogarch, which means 'soft'. Peat bog covers 17% of Ireland's surface, which gives us the third-highest proportion of peatland in the world, after Canada and Finland.

It takes one thousand years to grow just a one-meter depth of bog. The peat itself consists of 95% water, the remainder made up of rotting vegetation, pollen, dust and the like. In Ireland, it has traditionally been cut and dried and burned in the fireplace as turf. It is usually as a result of turf-cutting that the bog bodies come to light. The cold, acidic, oxygen-free conditions within the peat prevent decay and act to mummify and preserve the tissues of animal and human bodies.

Around a hundred bodies have been found in our Irish bogs to date, some male, some female, and those of children too. Some were thought to be there by accident, perhaps as a result of falling into the bog and drowning. Others were considered to be formal (and some not so formal) burials, and others appear to be rather more sinister.

Of these latter bodies, the most famous is known as Cashel Man, who was discovered near Portlaoise in 2011, and at over 4000 years old, is said to be the oldest European bog body ever found with skin intact; Old Croghan Man from Co. Offaly, and Clonycavan Man from Co. Meath. The exhibition also features Gallagh Man from Co. Galway, and Baronstownwest Man, from Co. Kildare.

These bodies have been analyzed in great detail using modern techniques and teams of renowned experts from all over the world. Much has been discovered about the lives they led, and the injuries which caused their deaths. Old Croghan man, for example, was a giant of a man, estimated to have stood approximately 6ft 6ins tall. His soft hands with their well-manicured nails suggest he was a nobleman, a fact which is supported by evidence of a diet consistently dominated by meat. He died somewhere between 362-175BC.

By contrast, Clonycavan man, 2300 years old, was a mere 5ft tall. His diet consisted mainly of grains and plants for the four months prior to his death; before that, he also ate a lot of meat. It is suggested that he may have died in the autumn after a summer diet of fruit, vegetables, and grain before a meat-rich winter diet could be resumed. Interestingly, he had a very distinctive hairstyle; it was cut to 21/2 cms long at the back, the rest of it 20 cms long, and gathered up into a bunch on top of his head. He also styled it with pine resin which came from trees only found in Spain and southern France, so it would have been expensive to import, suggesting that he too came from wealthy, perhaps noble origins.

According to the popular press, they all suffered overly violent and gruesome deaths. Old Croghan man, for example, had holes cut through his upper arms through which ropes were inserted to restrain him, after which he was repeatedly stabbed, had his nipples sliced off, and was then cut in half. Clonycavan man was disemboweled, bopped over the head three times with an ax, once across his body, and then had his nipples removed too. Call me cynical, but these gory stories have the makings of attention-grabbing headlines, and sensational, punter-pulling content.

In his paper, 'An Archaeological Interpretation of Irish Iron Age Bog Bodies', Eamonn Kelly, Keeper of Irish Antiquities at the National Museum explains it slightly differently.

He claims that the Clonycavan man was killed by ax blows to the head and chest and that he had a 40cm cut to the abdomen which was consistent with disembowelment. These wounds sound very like the cut and slash of battle, to me. Old Croghan man was killed by a stab wound to his chest. He had a defense wound on his arm, which suggests that he may have put his arm up to defend himself against the attack. This does not sound like the behavior of a sacrificial victim to me, although it does seem to indicate that he was probably weapon-less. He was then decapitated, his nipples cut, and his body cut in half at the stomach. The cuts in his arms which were threaded with ropes, Kelly explains as a means of fixing his body to the bottom of the bog. It seems to me that the perpetrators of this murder wanted the evidence well-hidden. It is unclear in both cases whether the mutilation occurred before or after death.

All very gruesome indeed, but Kelly is convinced that "this is absolutely not torture but a form of ritual sacrifice." The Iron Age King was responsible for the ongoing success of his people, for ensuring the land remained fertile, for the health of livestock and productivity of crops. If any of this failed, he was held responsible for that too and sacrificed to the Gods in return for better fortune.

Not only that, but it was believed that the King had to be whole and unblemished for his tribe to succeed; we see evidence of this in the mythological story of King Nuada of the Denann, who although he survived the loss of an arm in battle, could no longer remain as King because he was no longer whole.

Whilst I respect the work of these experts, I am not convinced by their theories. Archaeologists can only make educated interpretations of what they find. Interpretations, no matter how intelligent or keenly observed, are not facts. In my (amateur enthusiast) opinion, they are very quick to claim 'ritual' when they don't understand something. I have read a lot of mythology, a lot about early history, and followed a lot of archaeology. I am no expert by any stretch of the imagination, but I have enough sense to formulate an opinion of my own.

There are various references in mythology to the King's requirement to be whole. Nuada, as mentioned above, is one. Another is Fergus mac Leite, a King of Ulster, who after a battle with a sea monster emerged with wounds that twisted his mouth to the back of his head. Mirrors were removed from his home so he could not see his deformity, for such disfigurement would render him ineligible for Kingship. Few were permitted to witness it; those that did were under pain of death never to mention it. This deceit was maintained for seven years before finally word got out.

In a previous post, I already discussed the role of human sacrifice in ancient Ireland, or rather, the lack of evidence to support such practices. It is my belief that a King already wounded is by that fact rendered less than the whole, and therefore does not require further mutilation. If the King was not successful in looking after his people, why would they consider him such a great gift to offer to their Gods? Perhaps they simply murdered him due to his ineffectual rule. Perhaps the bog bodies weren't kings at all, but rich noblemen who fell foul of a bunch of robbers, who were plundered, killed and dumped in the bog where all evidence of the crime was hidden. Perhaps they were warriors hideously defeated in battle. Perhaps they were captives, brutally tortured.

What actual proof is there that these were ritual killings? Where is the proof which differentiates these killings from torture and murder? Some valuable items were discovered in the bogs, it's true, but ancient people have always deposited votive offerings in areas of water, there is nothing unusual about that. The various tribes of the time were continually battling and raiding against each other, mythology and history alike are full of such stories. Who is to say these men weren't tortured and murdered as prisoners of war? Their vicious wounds may be nothing more than the result of the cut and thrust of battle. That these bogs are situated along the lines of ancient borders only adds credence to the fact that battles may have been fought there.

In Irish mythology, the only story of human sacrifice concerns a king named Tigernmas. He set up an idol known as Crom Cruach, ordering his people to sacrifice their first-born child and a third of their grain to it. In a 6th century poem in the Book of Leinster, the effigy was covered in sheets of gold and surrounded by a circle of twelve stone figures located on the plain of Magh Slécht (now Moysleet) in Co Cavan. Children were killed by hitting their heads against the idol stone, and their blood sprinkled on it.

To me, the story reads rife with Christian propaganda. Tigernmas and three-quarters of his men were said to have mysteriously perished during their devotions to their idol, explained by the Christians as having been killed by their own God. Why would a God murder the very people who were feeding him the blood and grain he required? Fortunately, St Patrick comes to the rescue, striking the stone with his crozier and breaking it into many pieces. Out of it flew the demon, which the Saint subsequently banished to hell. It is worth noting, however, that this story is not mentioned in Patrick's own writing. If human or Kingly sacrifices were common, one would expect a great many stories like this to fill the ancient records. This was the only one I could find.

Incidentally, a dome-shaped stone figure covered in what are said to be La Téne style carvings was found in Co Cavan in 1921, broken and partly buried beside a Bronze Age stone circle near a church called Kilnavert Church. The original name for this site was Rath Slécht. Re-named The Killycluggin Stone, it now resides in the Co Cavan Museum, only five minutes’ drive from where I live.

As to the truth about Ireland's bog bodies? Unfortunately, the truth is, no one really knows.