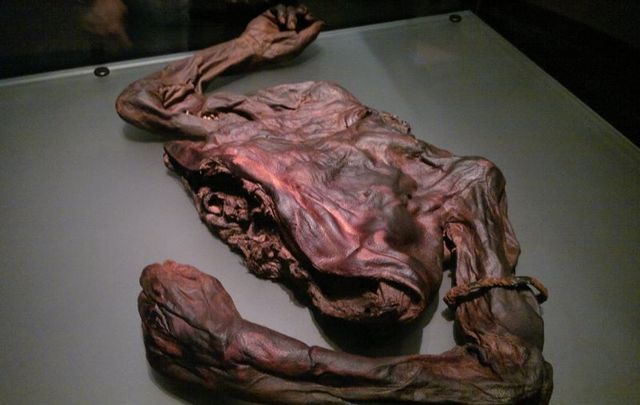 Very little is truly known of the ancient Celts who left no written records. The names of many of the gods worshipped by them are known through Latin or Gallo-Latin inscriptions made in late pre-Roman and Roman times.

The rituals with which these gods were celebrated have long since been forgotten. Likewise, the druids, who were the "priests" of Celtic society, have been obscured by the passage of time and the secretive nature of their order.

However, one major question has remained. Did the Celts practice human sacrifice?

It seems they did.

An expert has stated that bog bodies found in Ireland have proven that belief that the Celts ritually sacrificed their kings to the Gods.

The body also proves they underwent horrible deaths if the times turned bad under their reign.

The Iron Age bog body dating back to at least 2,000 BC was discovered near Portlaoise in the Irish midlands in 2011 by an alert bog worker and it bears the same hallmarks of ritual torture that two other famous bodies have.

Ned Kelly, keeper of antiquities at the National Museum of Ireland told the Irish Examiner in 2011 that a clear pattern has emerged in each case.

"We do not think of these bog bodies in the same way as we do axes or implements that are found," he says.

"You have to remember that these are individuals and it is absolutely essential to deal with their remains in a dignified manner. There would be no justification in taking these bodies unless we do so with respect and with the serious intent to tell their stories on their behalf."

The body is linked closely to two other major finds, the discoveries of Old Croghan Man and Clonycavan Man, also found in Irish bogs both of whom were ritually sacrificed.

Human sacrifice was apparently a normal part of the Celtic rituals, especially of kings in hard times.

"The killings tend to be excessive,"  Kelly, said "in that more is done to the bodies than would be required to bring about their deaths. Bog bodies may have their throats cut, been stabbed in the heart, and have other cut marks. However, it is absolutely not torture, but a form of ritual sacrifice."

"The king had great power but also great responsibility to ensure the prosperity of his people. Through his marriage on his inauguration to the goddess of the land, he was meant to guarantee her benevolence. He had to ensure the land was productive, so if the weather turned bad, or there was plague, cattle disease, or losses in war, he was held personally responsible."

At 6’6", Old Croghan Man, who was killed between 362 BC and 175 BC, was a giant of a man. he bore every appearance of a nobleman from his well-manicured soft hands to his diet, which was rich in meat.

Clonycavan Man was little more than 5 ft and used pine resin to keep his hair in place.

Kelly says Old Croghan Man died horribly, had had holes cut in his upper arms through which a rope was pulled through in order to restrain him. He was stabbed repeatedly and he had his nipples sliced before he was finally cut in half.

Clonycavan Man was disemboweled and struck three times across the head with an axe and once across the body and also had his nipples cut.

Cutting the nipples was more than torture, the aim was to dethrone the king.

"Sucking a king’s nipples was a gesture of submission in ancient Ireland," says Kelly. "Cutting them would have made him incapable of kingship in this world or the next."

"I think it is important we treat them with respect. They have come down to us with a story to tell and it is our duty to tell that story on their behalf. If we do that, it will give added meaning to their lives."

In all of Ireland's rich and ancient mythical tradition - there is only one reference to human sacrifice. The High King of Teamhair, Tigernmas, set up an idol called Cromm Cruach, and ordered that children be killed as offerings to it. It was, ironically, the druids of Ireland that brought an end to this bloody cult, murdering Tigernmas during a frenzied ceremony around the idol.

Elsewhere in Europe, it does appear that the Celts performed human sacrifice as part of their religious rituals. Since the Druids were the religious social class, they almost certainly would have participated in human sacrifices, and probably officiated at them.

This adds weight to theories and accounts from ancient Rome of Druidic killing, archeologists have said.

Experts say that Druids in the Celtic era possibly committed ritual human sacrifice on a mass scale. Julius Caesar, who led the first Roman landing in 55 BC, said the native Celts ‘believed that gods delighted in the slaughter of prisoners and criminals, and when the supply of captives ran short, they sacrificed even the innocent.’

Healthy respected males were essential to military victory, the ancient Celts preferred to sacrifice criminals or cripples - and this practice is confirmed by some of the material excavated at another site, in  Alveston in south Gloucestershire.

One individual probably suffered from Pagets disease while another appeared to have been severely disabled from bones recovered at the site. Significantly, the human bones were intermingled with the remains of dogs. Indeed it is likely that these animals were sacrificed along with the humans, perhaps to accompany them to the land of the gods of death, the underworld. Dogs and pits in the ground were often associated in Celtic tradition with the land of the dead.

Emma Oxenby Wohlfart, an expert in Celtic studies, argues that the evidence for human sacrifice among the ancient Celts is two-sided.

There are some problems with this approach. It is true that the human remains at these Gallic sanctuaries are probably cultic in nature. They do not resemble the remains found in either graves or dwellings, but that does not necessarily mean that a ritual killing took place. Animals sacrificed at these cult sites generally show signs of violent death and many met their death through decapitation. This is simply not the case with the human remains.

As of yet, no human remains have been found within a Celtic Gallic sanctuary that clearly indicate a violent death. In the case of singular skulls or headless bodies, decapitation appears to have taken place after death, and one cannot be certain that these humans were alive, or even intact, when they arrived at the sanctuary.

This raises a difficult question concerning the written sources, which suggest a wide variety of violent deaths: hanging, burning, drowning, garrotting, stabbing, and being torn to pieces by brute force. Where are all of these victims of violent sacrifice?

But it should be remembered that the first men to commit Ireland's oral histories and mythical cycles to writing were Gaelic Christian monks - they were neither pagans nor prejudiced Catholic priests.

They were men who were Christians in terms of what they believed, but who were still very much a part of Celtic culture and had a great reverence for the old ways. Indeed, Ireland's first Christian teachers saw themselves as druids, and even called Christ "The Chief Druid" and "The King of the Summerland". So these first Irish Christians were in fact prejudiced in favor of the druids, and would not have been too keen to remember - let alone commit to writing - any brutal deeds done by their spiritual forefathers.

We have little more than Roman propaganda writings as proof that the ancient Celts did indeed kill their fellow men as offerings for the gods. It is one of the thousands of ancient mysteries that, at this late hour in human history, we will probably never be able to satisfactorily solve.