Sammy Wilson said at a unionist rally that Prime Minister Boris Johnson has the responsibility "to prevent the annexation of Northern Ireland by Brussels by revoking the NI Protocol." 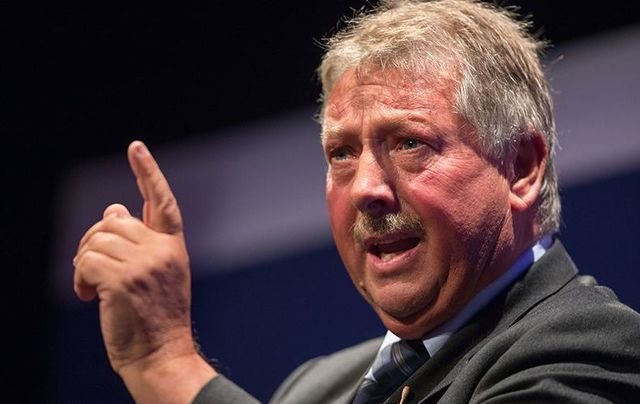 A unionist MP has compared the EU's handling of Northern Ireland to Russian President Vladimir Putin's annexation of Crimea in Ukraine.

DUP MP Sammy Wilson, who represents East Antirm, called on British Prime Minister Boris Johnson to oppose the EU's handling of Northern Ireland in the fall out from Brexit as much as he is currently opposing Russia's tactics in Ukraine.

Wilson was addressing a unionist rally against the Northern Ireland Protocol in Markethill, Co Armagh on Friday and told the crowd: “The Irish Sea border imposes the will of nationalists on unionists.

“It trashes the principle of cross-community consent, undermines the Acts of Union and breaches the constitutional settlement in Northern Ireland.

“Through the Northern Ireland Protocol, the EU in effect is annexing Northern Ireland just as much as President Putin has already annexed part of Ukraine and is seeking to undermine that country’s independence further.”

He added: “Boris Johnson has rightly led the campaign to stop Putin undermining the democratic wishes of the people of Ukraine, and he has an even greater responsibility as the PM of the UK to prevent the annexation of Northern Ireland by Brussels by revoking the NI Protocol.

“Make no doubt about it, whilst the protocol damages the economy of Northern Ireland, even more fundamentally it divides us from the country to which we belong, it undermines democracy and imposes foreign rules in this part of the UK.”

Russia annexed Crimea in Southern Ukraine in 2014 and has amassed more than 100,000 troops on the Ukrainian border in recent weeks amid reports of an imminent invasion.

Unionists in Northern Ireland claim the Protocol has undermined the region's position in the United Kingdom.

However, a majority of the Northern Ireland Assembly supports the Protocol, which retains the region's position in the EU Single Market.

Those in favor of the Protocol argue that it offers Northern Ireland economic protection from the negative consequences of Britain leaving the European Union.

Wilson added: "Any woolly thinking that you can be part of the EU single market and subject to its customs code while at the same time not be subject to its sovereignty is a dangerous delusion.

“Thus, any acceptable way forward requires the EU to give up its ill-gotten sovereignty over Northern Ireland.

“There can be no compromise on this constitutional imperative. This is not a matter to fudge or equivocate over and those who do forfeit the right to expect transfers from anti-protocol unionists (in the Assembly election).”