Pat Hume passed away in her native Derry today, September 2, surrounded by family. She is predeceased by her husband, Nobel Peace Prize winner John Hume 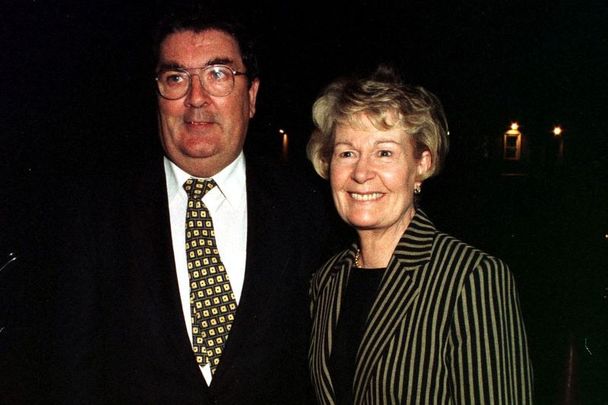 Pat Hume, the widow to Nobel Peace Prize Winner John Hume, passed away on Thursday, September 2 in her native Derry.

Hume's family said in a statement: "Pat died as she lived, surrounded by family, peacefully and generous to the end.

"Pat spent some days in the hospital in the days preceding her death and she saw first-hand the outstanding work that healthcare workers do, and the pressures that they are facing due to covid.

"She would prioritise public health at all times. Funeral arrangements will be announced in due course which will adhere to Covid guidance."

The Hume family said that her wake will be restricted to family members only, and expressed their thanks "to the doctors and nurses of Glendermott Medical Centre, Dr. Aaron Peace, the cardiology, palliative care teams and the staff of the Ambulatory Care Unit at Altnagelvin hospital, the Ambulance Service, the Foyle Hospice and all those who gave Pat such outstanding care."

We are so deeply sorry to inform you all that Pat Hume has passed away. Our thoughts and prayers are with all the Hume family tonight. RIP.

Both natives of Derry, Pat and John Hume married in 1960 and had five children together. While Pat left her 25-year teaching career to manage John's SDLP constituency office, she also made her own way as a champion for victims of The Troubles and was named to the Northern Ireland Memorial Fund in 1998 after the signing of the Good Friday Agreement, which her husband helped broker.

At her husband John’s funeral in August 2020, Father Paul Farren said, “when the history of Ireland is written, if Pat Hume’s name is not beside John’s, it will be an incomplete history.”

Hume's death comes less than a year after the John and Pat Hume Foundation, which aims to support and inspire Leadership for Peaceful Change, was launched last November.

Foyle MP Colum Eastwood, the head of the SDLP, which John Hume was a founder of, said in a statement on Thursday: “Without Pat Hume, there would have been no peace process in Ireland, that’s the simple truth.

“The compassion, integrity and immense fortitude that defined her incredible character breathed life into our peace over the course of a long campaign that, at times, must have looked like it would never bear fruit. She never gave up faith.

“Pat was, of course, John’s guiding light. She was his constant companion, sharing the road and easing the burden in the most difficult of times. When they came under public pressure and attacks on their home for doing what they knew was right, she remained his rock. The scale of his achievement was made possible by the depth of her love. But she was, in her own right, a fierce champion for peace and justice.

“Pat holds a special place in the hearts of the people of this city. She would have done anything for them and in return, they loved her. Our city is in mourning tonight for a woman who showed us unconditional compassion and support every day of her life. We all live in an Ireland that she nurtured, at peace with itself and free to set its own destiny. It is an incredible legacy that will never be forgotten.

“My thoughts are with Pat’s children Aine, Therese, Aidan, John and Mo, her beloved grandchildren, and their wide circle of friends at this incredible difficult time.”

Without Pat Hume, there would have been no peace process in Ireland, that’s the simple truth.

The compassion, integrity and immense fortitude that defined her incredible character breathed life into our peace. Thank you for everything, Pat.https://t.co/q2cuJ88UUA

Graham Warke, the Mayor of Derry and Strabane, said on Twitter that "behind every great man there is a great woman and this was no doubt the case with Pat Hume."

Very sad news this evening that Pat Hume has passed away. My thoughts & condolences are with the Hume family & in particular her children who will be devastated at their sad loss.
Behind every great man there is a great woman and this was no doubt the case with Pat Hume.
💐😪 pic.twitter.com/WzlAG11OIQ

Taoiseach Micheál Martin offered his condolences, noting that her and John's work brought "peace and stability to the island."

Deeply saddened to learn of the death of Pat Hume, wife of the late John Hume.

Alongside her husband, Pat made it her life’s work to bring peace and stability to this island – showing huge resilience and courage along the way.

My deepest condolences to all of the Hume family.

Deeply saddened to learn of the passing of Pat Hume. A dedicated and important voice for peaceful change throughout her life just as John was. She leaves a great legacy. Thinking of her family and friends this evening.

The US Consulate in Belfast offered their condolences upon Hume’s passing:

The Humes made an indelible impact in Northern Ireland, in the United States, and around the world. Pat Hume herself was a tireless champion for the North West. Our condolences are with the Hume family at this sad time. pic.twitter.com/N3DdZFpYsf