The PSNI said that missiles and fireworks were thrown at them during an incident in Belfast where people gathered to protest the Northern Ireland Protocol. 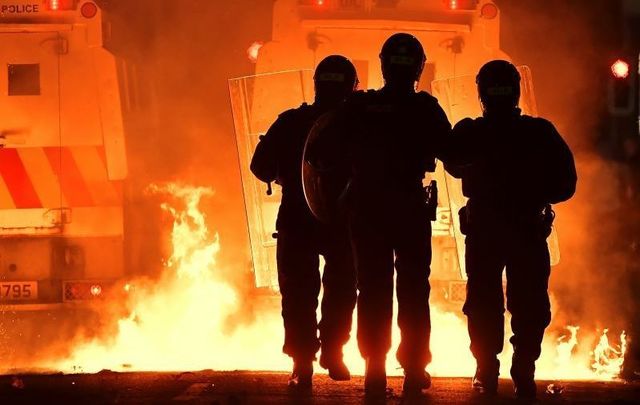 On Wednesday night, PSNI confirmed they were dealing with “disorder” in the Lanark Way area of north Belfast.

“A number of missiles and fireworks have been thrown towards police,” PSNI said.

Police are dealing with public disorder in the Lanark Way area of north Belfast this evening. A number of missiles and fireworks have been thrown towards police. Officers are advising motorists and pedestrians to avoid the area until further notice.

Just before midnight on Wednesday, PSNI said that police had been in attendance at public disorder at Springfield Road and Lanark Way areas of West Belfast.

“Officers were deployed to the Springfield Road and Lanark Way areas from approximately 5 pm on Wednesday.

“Following a small protest in the Lanark Way area which obstructed the road for a period of time, disorder broke out involving both sides of the community and continued for several hours with items being burnt on the roads and missiles thrown at police officers and police vehicles.

“It was extremely fortunate that there were no reports of injuries to members of the police and police officers, however, a number of police vehicles were damaged by masonry attacks. Calm was restored to the area by around 10:30 pm.

“Two males aged 12 and 15 were arrested on suspicion of riotous behavior and have since been released on bail as police enquiries continue.

“An evidence-gathering operation was in place and an investigation is now underway to identify those involved in disorder."

Chief Inspector Darren Fox said: “The disgraceful scenes of disorder seen this evening put members of the public and the responding police officers in real danger and must be condemned by all. The totally unacceptable behavior by those intent on trouble caused significant inconvenience to the local community and only served to heighten community tensions across the area.

“I would like to thank local community representatives and youth workers for their influence and assistance in preventing further disorder. I would appeal for those involved with disorder to consider the choices they make in coming out onto the streets to attack police, property, and their own communities."

Leading up to the protest, a message was circulated on social media which read: “Calling all loyalists.

“As the DUP have let the loyalist community down once again it’s time for the people to take a stand.

The gates dividing the loyalist Shankill area and nationalist Springfield Road were closed as a precaution, the Belfast Telegraph reported on Wednesday.

PSNI Chief Superintendent Darrin Jones told BBC Radio Ulster on Thursday: "At one stage there were up to 100 people on both sides of the interface attacking police officers."

He added: "Most of the crowd who were attacking police, and attacking them in a sustained way with bottles, masonry, fireworks, were from that age, about early teens to early 20s.

"What happened was the protest itself was peaceful, but once it did go in, the onlookers then who had gathered they put their attention to police and attacked the police."

Wednesday's incident comes just days after two masked and armed men hijacked and burnt out a bus in Newtownards, Co Down. They were reportedly also protesting the Northern Ireland Protocol, and have been reportedly linked to the Protestant Action Force.

Loyalists are fiercely opposed to the Northern Ireland Protocol, a portion of the agreed-upon Brexit arrangement, which aims to keep Northern Ireland in both the United Kingdom's customs territory and the EU's single market. It effectively creates a border in the Irish Sea, much to the anger of unionists.

On Thursday evening, North Belfast PSNI said officers were conducting high visibility patrols of Lanark Way and that "thankfully" everything was calm.

Neighbourhood officers from Tennent Street are conducting high visibility patrols of Lanark Way this evening. Thankfully everything is calm tonight and there are no issues. #keepingPeopleSafe pic.twitter.com/lKXjvl254I