PSNI are still investigating the attack on a bus in Newtownards, Co Down which is understood to be part of a campaign against the Northern Ireland Protocol. 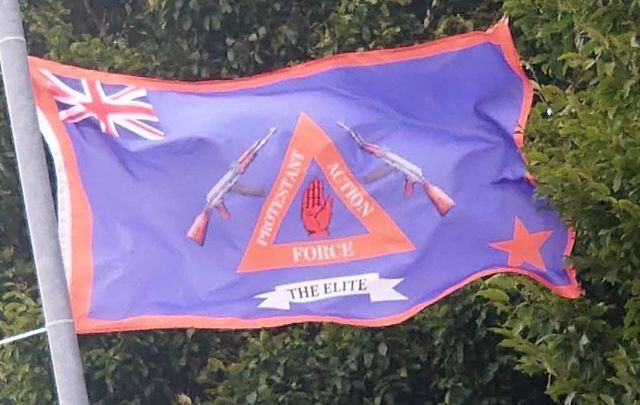 The flag of the Protestant Action Force flying from a lamppost in Dundonald in Belfast. Wikimedia Commons / Whispering Pine (CC BY-SA 4.0)

The two masked and armed men who hijacked and set fire to a bus in Newtownards, Co Down on November 1 claimed to be a part of the Protestant Action Force, The Belfast Telegraph reports.

The men reportedly told the driver of the bus, who was not injured but was badly shaken after the incident, that the attack was part of a campaign against the Northern Ireland Protocol.

According to The Belfast Telegraph, “The Protestant Action Force was a cover name used by loyalists, mainly the UVF [Ulster Volunteer Force], to avoid directly claiming responsibility for killings during the Troubles. It is believed to have been used to claim the murders of at least 41 Catholics."

In July, the Sunday World reported that a Protestant Action Force emblem appeared besides emblems of the UVF and YCV (Young Citizen Volunteers) on a wall at the Mourneview estate in Lurgan, Co Armagh.

The Police Service of Northern Ireland (PSNI) said that Monday’s incident took place at roughly 6:30 am in the Abbot Drive area of Newtownards, Co Down. Two masked and armed men boarded the 7a Ulsterbus and doused it in fuel before setting it alight and completely destroying it.

On Monday, PSNI Chief Inspector Trevor Atkinson described the event as "appalling" and urged anyone with information to contact the police. He said the PSNI "will be stepping up our visible neighborhood policing presence in this area in the coming days."

Police are again appealing for information following the hijacking of a bus in the Abbot Drive area of Newtownards this morning (1 November). pic.twitter.com/1rOQOmp6xj

Monday’s incident was condemned by political leaders across Northern Ireland.

DUP leader Sir Jeffrey Donaldson, who is fiercely opposed to the Northern Ireland Protocol and has threatened to pull out of power-sharing in Stormont if changes are not made, said on Monday that “there was never any justification for people with guns on our streets and damaging property - there never will be.”

There was never any justification for people with guns on our streets and damaging property - there never will be. Thuggery & terrorism will do nothing to remove the NI Protocol. Political action has secured progress and must be allowed to continue. Violence has no place in this. https://t.co/dHrPW7m1dL

Utterly disgraceful, depressing and stupid actions of thugs and criminals.

In what way does this help address issues concerning the protocol, it simply hurts their own community. Wise up…… 😡 https://t.co/4i2FjrvFSg

Sinn Féin MP John Finucane said the incident was "was dangerous, reckless and despicable." He further said that “this is a time for calm and responsible leadership to reduce tensions and ensure there is no further escalation of violence on our streets.”

SDLP Deputy Leader Nichola Mallon slammed the hijackers as “mindless, faceless thugs” and said they’ve “done nothing more than harm their own community.”

Earlier on Monday, told BBC that it was understood that the two men “muttered something about" the Northern Ireland Protocol as they hijacked the bus.

SDLP Deputy Leader @NicholaMallon spoke yesterday evening about the shocking attack on a bus in Newtownards:

"The mindless, faceless thugs who carried out this attack have achieved absolutely nothing." pic.twitter.com/4w4fmbYuGq

Loyalists are fiercely opposed to the Northern Ireland Protocol, a portion of the agreed-upon Brexit arrangement, which aims to keep Northern Ireland in both the United Kingdom's customs territory and the EU's single market. It effectively creates a border in the Irish Sea, much to the anger of unionists.