DUP leader and First Minister Sir Jeffrey Donaldson criticized the use of Irish flags on loyalist bonfires throughout Northern Ireland ahead of July 12. 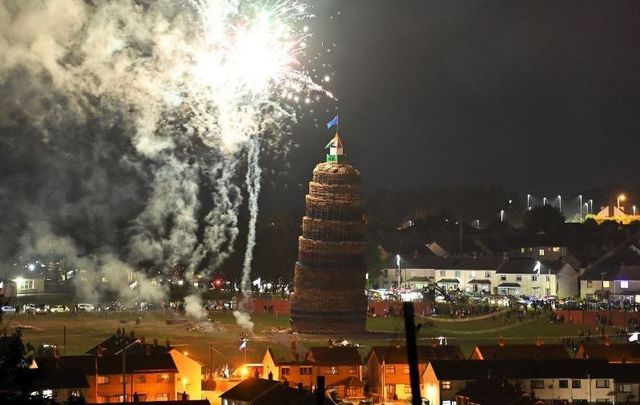 July 12, 2021: The 11th night bonfire which marks the beginning of the annual protestant 12th of July celebrations is lit in the Craigyhill housing estate in Larne, Northern Ireland. Getty Images

A number of Northern Irish politicians, including First Minister Sir Jeffrey Donaldson, have condemned the burning of Irish tricolors on "Eleventh Night" bonfires throughout Northern Ireland on Sunday evening.

Loyalist communities in Northern Ireland traditionally light large, towering bonfires on July 11 ahead of the celebration of the anniversary of the Battle of the Boyne and the Battle of Aughrim on July 12.

However, the bonfires have drawn criticism from both nationalist and unionist politicians, with DUP leader Jeffrey Donaldson stating that Irish tricolors or election posters had no place on the bonfires.

"I don't want to see election posters or flags burnt on bonfires. I think we can celebrate our culture and our tradition in a respectful way," Donaldson told BBC.

"Respect is a two-way street; if you want to gain respect for your traditions and culture you've got to show respect for the traditions, culture, and symbols of other communities."

Donaldson expressed concerns over the size of some bonfires and said that authorities needed to work with organizers to ensure the safety of everyone celebrating "Eleventh Night".

"I think we need to continue working with those who organize bonfires to look at safety issues and to look at the height of bonfires, where they are located. In the end, public safety is absolutely paramount when it comes to this."

Meanwhile, Sinn Féin MLA Caoimhe Archibald on July 9 described the images as an "expression of hate".

Others have raised concerns over the safety of the bonfires, with journalist Patricia Devlin posting disturbing images of a large bonfire collapsing in Portadown, County Armagh.

Around 160 bonfires were lit across Northern Ireland on Sunday night in celebration of July 12.

Several other bonfires were ignited on Friday and Saturday night.

The Orange Order parade season will culminate on Monday, July 12, with more than 100 small parades taking place across Northern Ireland.

Before the outbreak of the COVID-19 pandemic, Orange Order parades would have culminated in 18 large events across the region, but these events have been replaced by smaller local parades to facilitate social distancing.

Up to 2,000 PSNI officers will be policing the events.