People born in the Republic of Ireland but living in Northern Ireland face a hefty price tag for British passports, which some believe is in conflict with the Good Friday Agreement. 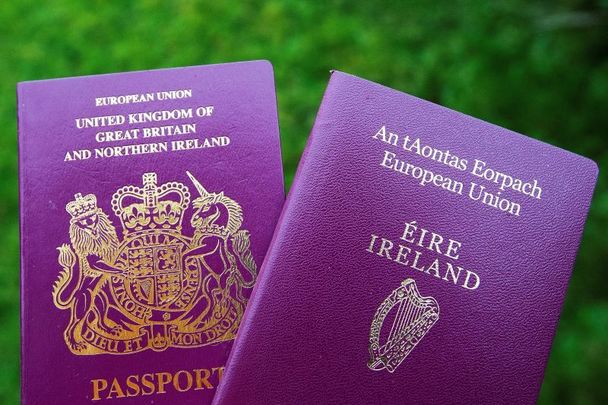 The matter of the cost of British passports for people living in Northern Ireland but born in the Republic of Ireland is being considered in an inquiry. RollingNews.ie

People living in Northern Ireland who were born in the Republic of Ireland after 1948 have to pay £1,330 to get a British passport.

The matter is being considered as part of an inquiry into Citizenship and Passport Processes in Northern Ireland that was launched in December 2020 by the Northern Ireland Affairs Committee (NIAC) which will probe whether UK nationality law incorporates adequately the birthright provisions of the Good Friday Agreement, also known as the Belfast Agreement.

At the launch of the inquiry last year, the NIAC said that the Good Friday Agreement “guarantees the right of the people of Northern Ireland to identify as British, Irish, or both and to hold passports accordingly."

It continued: “People born in the Republic of Ireland, who have lived most of their lives in Northern Ireland, have to undertake a naturalisation process to become a British citizen, even if they identify as British. This is both complex and, at £1,330, costly.

“Meanwhile, most people born in Northern Ireland are entitled to claim Irish citizenship and can apply for an Irish passport relatively easily.

"The Committee will consider whether the UK Government should ease barriers to Republic of Ireland-born applicants in Northern Ireland for British citizenship.”

More recently, the NIAC said: "In 2020,  the NIHRC commissioned and published a report which recommended that the Government change parts of nationality law to better align with the birthright provisions of the Agreement.

"The Government has since made changes to the EU Settlement Scheme to allow family members of British and British-Irish citizens of Northern Ireland to apply to the scheme. The Committee is examining the interaction of UK nationality law and the provisions of the Belfast/Good Friday Agreement."

The first evidence session for the Citizenship and Passport Processes in Northern Ireland inquiry was held virtually on March 10.

Speaking during the virtual evidence session, DUP East Derry MP Gregory Campbell said: "If we look at the de facto position at the moment, which is that people in Northern Ireland, who have never been to the Republic [of Ireland], never lived in it, never paid taxes in it, never voted in it, never were resident, can apply in Northern Ireland by going on to post office getting the application form for an Irish passport, paying the required fee and then become Irish passport holders.

"That's been the case for a number of years.

"People in Northern Ireland [who] perhaps 50 or 60 years ago were born a couple of miles across the border in the Republic but have lived in Northern Ireland virtually all their lives - they regard themselves as British citizens, they're British taxpayers, British residents, British voters - they apply for a British passport.

"They have to pay the princely sum of £1,300 to become what they already are."

However, Les Allamby, chief commissioner of the Northern Ireland Human Rights Commission (NIHRC), said that such people were not covered by the Good Friday Agreement and could not, therefore, identify as British, Irish, or both “because he or she is not part of the people of Northern Ireland."

Campbell said: “There are tens of thousands of people in Northern Ireland who have lived here virtually all their lives... and are not part of the people of Northern Ireland?

"I think they will find that amazing. That is something that has to be resolved.”

Allamby went on to say: “If the UK government wanted to find a way of allowing somebody in those circumstances to be able to acquire British citizenship seamlessly and relatively easily there is no reason that we can see why the UK government shouldn’t do that."

Responding to the matter, Emma DeSouza, a native of Derry who in recent years embarked on her own right to identify battle and who will be providing evidence for the inquiry, said that the issue is not related to the Good Friday Agreement:

Nought to do with the Good Friday Agreement of course but rather the UK's prohibitive and restrictive naturalisation policy for those resident in the UK but born outside of the UK. https://t.co/7xsbiwjVun