Robert Collins' on writing his new book "Noraid and the Northern Ireland Troubles, 1970-1994". 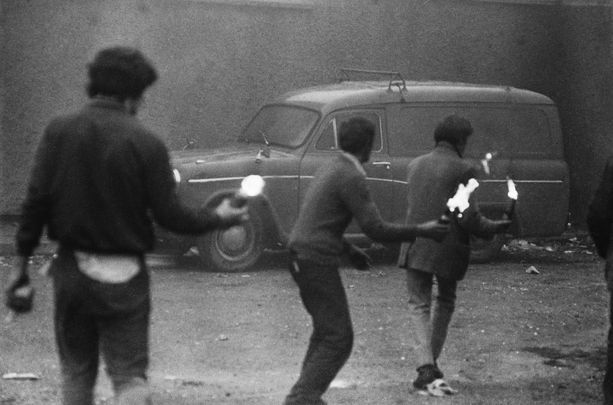 Molotov cocktails being thrown in Northern Ireland during The Troubles. Getty

Robert Collins' book acts as a starting point for research into Irish Northern Aid and its role in fundraising and publicizing the republican struggle in the United States.

I became interested in researching Irish America and Northern Ireland through a class at the University of Limerick with Dr. Ruan O'Donnell about The Troubles.

Focusing originally on the tragic events of Bloody Sunday in Derry on January 30, 1972, I began researching Irish America and came across the name Irish Northern Aid (INA) as a support group for the families of republican prisoners.

In its aftermath, INA held protest marches and fundraising events that stretched for blocks in New York, Philadelphia, Boston, and as far west as San Francisco. As I delved further into the topic, it became clear to me that this was a significant organization that supported the Republican movement in Ireland, both financially and through a sustained publicity campaign.

However, no serious academic examination had ever been done on the organization, outside of some mention in books and often derisory accounts of its activities.

On Tuesday, October 18, my book, Noraid and the Northern Irish Troubles, 1970-1994, was launched in Belfast at the James Connolly Visitor Center on the Falls Road.  The Q&A was chaired by political commentator Andrée Murphy and featured long-term INA activist and current Ancient Order of Hibernians Freedom for All Ireland National Chairperson Martin Galvin via Zoom. It also featured important contributions from Fra McCann, Tom Hartley and Ciaran Cunningham about how much the support from America meant to nationalist families in the six counties.

Hearing first-hand accounts of the impact of these encounters was a humbling experience and reminded me that sometimes just researching a topic is not enough to get a full grasp of the gravity or importance of these relationships. You must hear it from the people involved.

All those in attendance including, most of all, myself, were treated to some excellent commentary and anecdotes on the trans-Atlantic nature of the conflict and the awareness of the Irish American community to events in Northern Ireland.

A week later on October 25, the Teacher’s Club in Dublin was the location for a second book launch, with O’Donnell, senior lecturer in history at the Department of Limerick as the special guest.

In launching the book, he spoke of the special relationship between America and Ireland, dating as far back as the 1798 United Irishmen Rebellion.  Situating Irish Northern Aid within this tradition was a central theme of the book, as was outlining the role of Irish America in legitimizing the struggle for full national sovereignty on the island of Ireland.

The launch also contained valuable contributions from the audience, including former Lord Mayor of Dublin Mícheál Mac Donncha and lifelong Irish republican Jim Monaghan. Also in attendance at the launch was Sinn Fein representative for North America Ciaran Quinn, who recently returned from a 10-day trip to Canada alongside John Finucane MP.

My book acts as a starting point for research into INA and its role in fundraising and publicizing the republican struggle in the United States. As such, there are inevitably people both in Ireland and America who played a greater role than portrayed.

Invariably, there are also likely people to whom this research has given too much credit.  Nonetheless, the goal was to provide a serious academic examination of the role that sections of the Irish American community played in both sustaining and ultimately ending the armed conflict of the Provisional IRA.

But after hearing the stories from interviewees and those in attendance in Belfast and Dublin, this author was humbled and is even more determined to further research Irish America and the people who shaped its direction for a quarter of a century.