The Troubles in Northern Ireland lasted from 1969 to 1994 or so and were fertile ground for music makers. 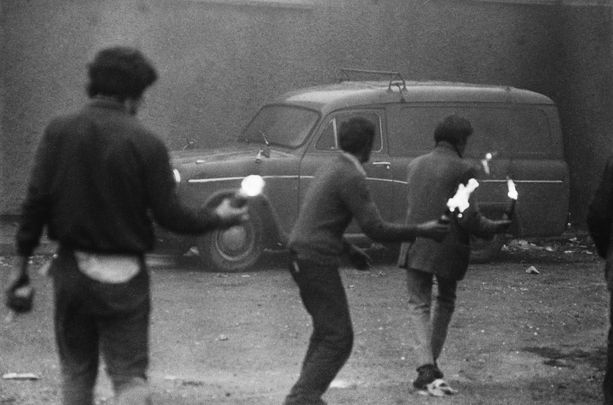 Molotov cocktails being thrown in Northern Ireland during The Troubles. Getty

Anti-war anthems and Republican ballads - a look back at the most famous songs during that painful period in Ireland's history.

The Troubles in Northern Ireland lasted from 1969 to 1994 or so and were fertile ground for music makers.

From anti-war anthems to haunting Republican ballads and loyalist anthems, it’s amazing to look back at the various famous songs that came out of that painful period in Ireland’s history.

Here is a little background for our selection of the ten greatest songs of the period.

“The Island” by Paul Brady

Considered one of the greatest anti-war songs ever written, it contrasts the need for love and life over violence.

“The Town I Loved So Well” by Phil Coulter

Done to death, like “Danny Boy,” but a magnificent song in its earliest iteration. A paean to the people of Derry.

“Only Her Rivers Run Free” by Mickey MacConnell

A haunting Republican ballad that uses magnificent imagery to conjure up the loss caused by partition.

Written one day when the master balladeer pondered on where the North began and the Republic ended on a drive north. This song is haunting and evocative.

“Song for Ireland” by Mary Black

Not strictly about the North but a stanza refers to it as a dream of a land where no one had to fight. Also, this is beautifully sung by the Irish songstress.

“Street of Sorrow” by The Pogues

A ballad about “The Birmingham Six,” a case where innocent men were jailed for a crime they did not commit. Shane MacGowan and the Pogues are at their best with this tune.

The theme to “Harry’s Game” by Clannad

The song, which became a huge international hit, was written to depict the story of The Troubles among all sides in Northern Ireland and the future of the sides. The lyrics, derived from an ancient text from Galway, explain how in war and in violence, no side will win, all lose.

“Sunday Bloody Sunday” by U2

"This is not a rebel song,” Bono famously announces at the beginning and indeed, it isn’t, but it’s brilliant anyway.

“Give Ireland Back to the Irish” by Paul McCartney

McCartney wrote it after Bloody Sunday in Derry. The former Beatle said, "It was the first time people questioned what we were doing in Ireland. It was so shocking. I wrote 'Give Ireland Back to the Irish'.”

“The Sash My Father Wore”

The loyalist anthem is a catchy tune and played to exhaustion every July 12, but still a fine air.

“Men Behind the Wire” by Barleycorn

About internment and allegedly first written on the back of a napkin in a pub. The song quickly caught on.