Nancy Pelosi to discuss Brexit on visit to Dublin and NI

US Speaker of the House Nancy Pelosi will lead a US Congressional delegation to Northern Ireland and Dublin this week. 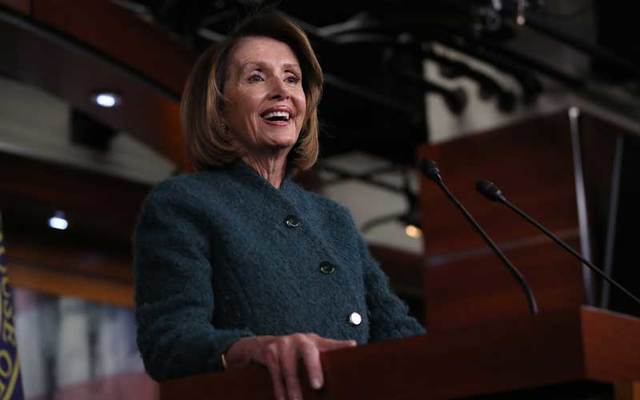 US Speaker of the House Nancy Pelosi. Win McNamee/Getty Images

US Speaker of the House Nancy Pelosi is visiting Northern Ireland and Dublin this week, plans to meet with senior government officials and local leaders to discuss Brexit.

In a statement, it was announced that Pelosi would be leading a US Congressional delegation to London, Dublin, Northern Ireland and Stuttgart. It is believed she may also visit the Irish border. immigration and the E-3  visa situation for Ireland will also be discussed.

She said “We will meet with senior government officials and local leaders to learn more about the future of the UK and Ireland amid Brexit and to express America’s enduring commitment to a peaceful and prosperous future for all who live there.”

The Speaker added: “The United Kingdom and Ireland each have a deep and special bond with the United States.

On Wednesday 17 April President Higgins will host a working meeting for a US Congressional delegation, led by Ms. Nancy Pelosi (@SpeakerPelosi).https://t.co/8XlVQfNutF pic.twitter.com/ZqllMhaGS6

“Our distinguished delegation is traveling at a critical moment for two of our closest allies, and we look forward to high-level discussions about the path forward on our shared security and economic interests.”

Read More: Nancy Pelosi to lead a delegation to Ireland in push for new visa deal

Speaker Pelosi will address the Dáil on Wednesday to mark its 100th anniversary and will meet with President Michael D Higgins during her visit to Dublin, the BBC reports.

Her schedule in Northern Ireland has not yet been announced.

Also part of the Congressional delegation are : Chairman of the House Ways and Means Committee Richard Neal and Congressman Brendan Boyle.

The total members of the delegation are: