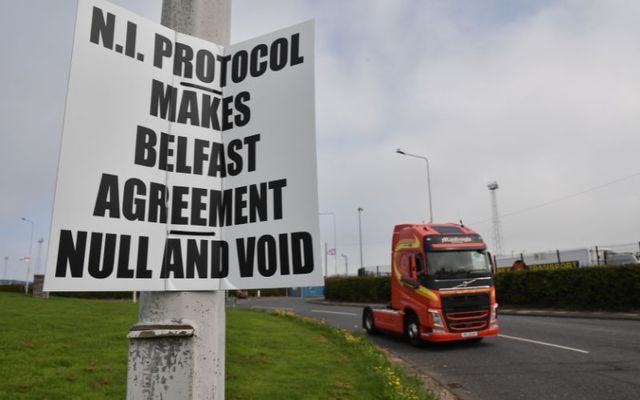 A Northern Irish politician has described recent threats from loyalist paramilitaries as a "threat to national security".

Alliance MLA Sorcha Eastwood made the comments after an umbrella group of loyalist paramilitaries warned of "dire consequences" if there was any move toward joint authority between the Irish and British Governments over Northern Irish affairs.

The Loyalist Communities Council (LLC), which represents the UDA and the UVF, also warned that the "Irish Government should not be visiting Northern Ireland" while the Northern Ireland Protocol remains in place.

"There are no circumstances in which joint authority would be tolerated, and any effort to impose it would inevitably have dire consequences for the progress made from 1994 onwards," the LLC said in a recent letter to unionist politicians.

"In such circumstances, loyalist activists who have worked tirelessly for peace (even in the most trying of circumstances, such as the injustice of the Protocol) would be powerless to prevent an unprecedented reaction."

The UK Government's Northern Ireland Office (NIO) has said in a statement that joint authority is "not being considered". The Irish Independent reports that the NIO statement has prevented a loyalist terror attack on an Irish Government figure.

The publication reports that the attack was just hours away from being carried out and was only halted when paramilitary leaders stood down in response to assurances that there would be no joint authority.

In its letter to unionist politicians, the LLC said the "continued presence" of Irish ministers in Northern Ireland was also inflaming "anger and tension in loyalist communities".

Eastwood told the Sunday World that the threats were "clearly a matter of national security" and called on the NIO to re-examine its approach to meeting with the LLC.

"The NIO must urgently re-examine its approach to meeting with the LCC, as it gives credibility to what is essentially an umbrella group for active terror groups," The Laganvalley MLA told the Sunday World.

"The UK Government also needs to take the same stance with active loyalist paramilitaries as it does dissident republicans.

"The UK Government’s current approach to loyalist terrorism is that it is simply criminality. That is unsustainable. It is clearly a matter of national security when politicians, whether from here or neighboring governments, are threatened.

"Any threats from these groups are disgraceful and need removed immediately. Repeated statements of this nature are a sinister development and play into the coercion paramilitaries carry out in our community."

Eastwood also said the groups represented by the LLC "need to pack up and leave the stage".

UUP leader Doug Beattie similarly condemned the perceived threats, describing the letter as "the words of unionism in retreat".

"Quite simply it is the words of unionism in retreat, not the confident presentation of our argument which will win out on the protocol," Beattie told the Belfast Telegraph.

"It is the school of thought which sees unionism return to the table in a weaker position each time."