British Prime Minister Boris Johnson has admitted that there will be border checks on goods moving between Northern Ireland and mainland Britain after previously promising that they would never happen in the lead up to last year's general election. 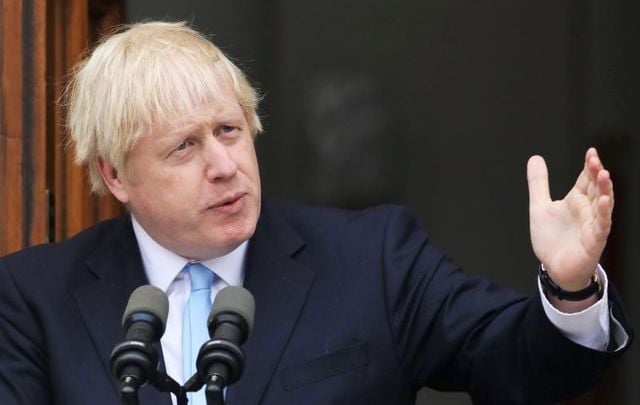 UK PM Boris Johnson promised British voters that there would be no border controls post-Brexit. RollingNews.ie

UK Prime Minister Boris Johnson has admitted that there will be border checks on goods moving between Northern Ireland and mainland Britain after previously promising that they would never happen in the lead up to last year's general election.

Declan Kearney, a junior minister in the Northern Ireland Assembly, said that Johnson's Government had confirmed that it would be installing border checks in three Northern Irish ports, according to the Guardian.

The British Government confirmed the news in a letter to the executive office in Stormont, Belfast.

"The sum total of that, and without breaching executive confidentiality … [is that the] British government has confirmed it will urgently put in place detailed plans with the executive, which does include the physical posts at ports of entry," Kearney said in comments reported by the Guardian.

It represents a complete U-turn for Boris Johnson, who promised concerned voters in the run-up to last year's election that trade between Northern Ireland and mainland Britain would not be subject to any customs declarations.

He told voters in November there would be no customs forms for trade between the two areas and said people should throw the forms in the bin if they are presented with one.

"If somebody asks you to do that tell them to ring up the prime minister and I'll direct them to put that form in the bin."

Johnson claimed that there would be no restrictions of any kind on trade between Northern Ireland and Britain.

"There will be no forms, no checks, no barriers of any kind. You will have unfettered access."

However, a leaked document from the British Treasury in December seemed to confirm that the government would be installing border control posts in Northern Ireland. Johnson dismissed the document as "wrong", while members of the opposition accused him of misleading the public.

Under October's Brexit deal, Northern Ireland will remain in the EU Single Market for agriculture and manufactured goods, while the rest of Great Britain leaves entirely.

The customs checks are therefore a requirement of the Brexit deal since Northern Ireland will be following a different set of rules and procedures to the rest of Britain.

EU laws dictate that animals and food products must enter the single market through designated Border Control Posts. These laws will apply to trade between Northern Ireland and mainland Britain on January 1, 2021, at the end of the transition period as Britain leaves the European Union. Mainland Britain will implement its own laws on the same date.

The British Cabinet Office said in a statement that the Government has "always been clear that there will be requirements for live animals and agrifood" moving between the two areas, contrary to Johnson's assurances that there would be no such requirements.

The Cabinet Office pointed to ports in Belfast and Larne where such customs checks already take place and said that the protocol puts legal obligations on both the EU and the UK.

"We are committed to complying with ours, just as we expect the EU to comply with theirs," a spokesperson for the Cabinet Office said.

Boris Johnson seemed to acknowledge the enhanced border checks after a spokesperson said that the changes would only be "limited."

"Beyond limited changes introduced by the protocol, there'll be no changes to GB-NI trade," Johnson's spokesperson said on Thursday.