Brandon Lewis, the new Secretary of State for Northern Ireland, said unequivocally that there would be no border down the Irish Sea in the aftermath of Brexit. 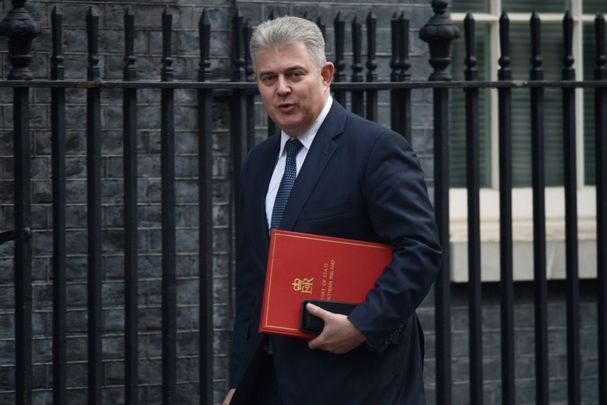 Brandon Lewis, the new Secretary of State for Northern Ireland, has said the UK will "not be having a border down the Irish Sea."

On his first visit to Northern Ireland in his new role, Lewis said that the United Kingdom would remain one area and that all parts of it would benefit from any new global trade deals struck in the aftermath of Brexit.

Under the Brexit withdrawal deal, Northern Ireland will continue to follow EU legislation on agriculture and manufactured goods. The rest of the UK will not.

That means that there will have to be some form of border check on certain goods coming from Northern Ireland into the rest of the UK - something that led to fears among Unionists that Northern Ireland would become isolated from mainland Britain.

But Lewis, who replaced Julian Smith as Secretary of State as part of Boris Johnson's cabinet reshuffle on Thursday, was adamant that there would be no border in the Irish sea between Britain and the island of Ireland.

Spoke to Brandon Lewis this morning, we agreed to an urgent early meeting to discuss the range of issues on his desk, including; Legacy, bad faith on pensions, Brexit and political & financial commitments to make the Assembly & Executive sustainable

Predictably, Brexit was chief among the discussions.

Arlene Foster, meanwhile, said that she hoped that Lewis would ensure the survival of the administration in Northern Ireland.

The DUP leader added that Sinn Féin's recent calls for a border poll were wrong. She said that the strengthening of the union between Northern Ireland and the UK would be better for the people of Northern Ireland.

"It's not for Sinn Féin to decide whether a border poll happens or not - it's for the secretary of state for Northern Ireland, if he looks at Northern Ireland and decides that there has been a change," she said to BBC Radio 4.

"Actually the change has been in the opposite direction and the union needs to be underscored as the best for all of the people of Northern Ireland.

"To do that, Brandon Lewis has to be an advocate for the union and I very much hope that he is."