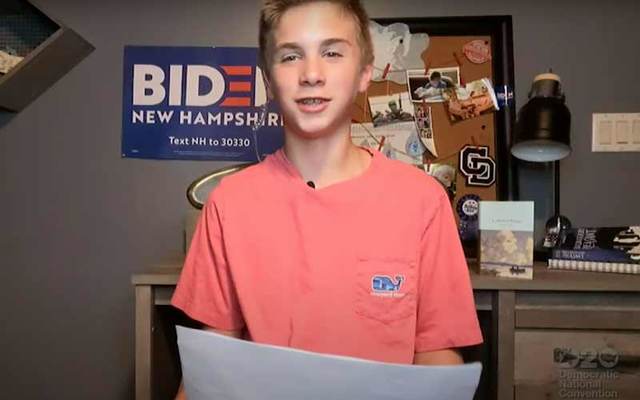 A 13-year-old boy shared with the world how Democratic presidential nominee Joe Biden made him feel more confident about his stutter.

Brayden Harrington, from New Hampshire, gave his powerful address to the Democratic National Convention last Thursday, the final night of the virtual convention.

The teenager described how he met the former vice president during a campaign event in Concord, New Hampshire in February. Biden spoke with Harrington at the rope line and afterwards invited the teen backstage so they could continue their conversation about stuttering, CBS reports. Biden shared with him how he had to overcome the same issue.

Read More: Joe Biden, with an assist from Seamus Heaney, crushes it with his acceptance speech

"He told me that we were members of the same club: We stutter. It was really amazing to hear that someone like me became vice president," Harrington said in the video.

“He showed me how he marks his addresses to make them easier to say out loud. So I did the same thing today,” said Brayden, who then revealed the markings on the piece of paper he was reading.

“I’m just a regular kid, and in a short amount of time, Joe Biden made me more confident about something that’s bothered me my whole life. Joe Biden cared.”
– Brayden Harrington#DemConvention pic.twitter.com/KoPprXXwCQ

“I’m just a regular kid, and in a short amount of time, Joe Biden made me feel more confident about something that’s bothered me my whole life. Joe Biden cared. Imagine what he could do for all of us. Kids like me are counting on you to elect someone we can all look up to. Someone who cares. Someone who will make our country and the world feel better. We’re counting on you to elect Joe Biden."

Harrington received overwhelmingly positive support on social media after his speech, with many commenters remarking on the young man's bravery and courage.

As someone who stutters, I never imagined I might see something like that in a culture that has dismissed an impairment as a funny pratfall. What a brave kid. I wasn’t that brave. #DemocraticConvention

I want to say this to Brayden Harrington (the precious young man with a stutter):

Young, Sir: You humble me. I am in TOTAL AWE of your courage. You have a titanic spirit and unshakeable will. You made the worst bully look pathetic, ridiculous and so very small. I salute you.

Biden has often spoken about his lifelong struggle with stuttering, The Hill reports.

During a CNN town hall in February, the candidate shared how having a stutter has affected his life.

“You know, stuttering, when you think about it, is the only handicap that people still laugh about. That (they) still humiliate people about. And they don’t even mean to,” said Biden.

Biden has said he didn’t receive professional help for his speech impediment but the proud Irish American practiced speaking in the mirror for years reciting poetry written by Irish poets like William Butler Yeats.