Martin said Ireland would support any EU sanctions that impact Russia's industrial base and its ability to wage war. 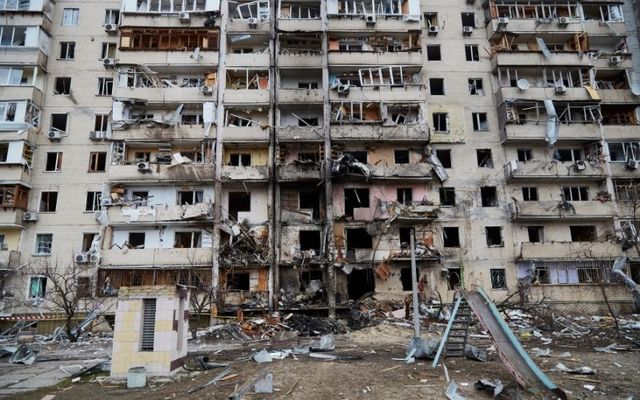 A residential building damaged by a missile on February 25, 2022 in Kyiv, Ukraine. Getty

Taoiseach Micheál Martin has condemned the Russian invasion of Ukraine as outrageous, immoral, and unjustifiable, stating that Ireland would impose severe economic sanctions against Russia.

Martin was speaking to reporters in Brussels after European leaders met on Thursday night to discuss bringing sanctions against Russia after it launched a full-scale invasion of Ukraine on Thursday morning.

The Taoiseach promised that Ireland would support the imposition of "comprehensive and severe sanctions" on Russia that reflect the "grave nature of the assault on the Ukrainian people".

"We will be supporting the strongest possible sanctions that can be deployed, particularly in the financial sector, in energy and transport, and in a range of sectors that weaken the industrial base of Russia and its capacity to wage war," Martin told reporters in Brussels.

He accused Russia of violating the fundamental principles of the United Nations Charter by launching an "outrageous and immoral attack on the territorial integrity of Ukraine and its people".

He said Ireland would support Ukraine in any way possible and confirmed that Ireland will provide an initial €10 million humanitarian fund.

"We'll also stand ready to do whatever else we can to assist the Ukrainian people and the Ukrainian government in their hour of need," he told reporters.

Martin called on all EU leaders to show a united front in response to Russian President Vladimir Putin's decision to launch a full-scale invasion.

"We believe in unity of purpose. It's extremely important that we work collectively and in a unified way to pursue the strongest measures possible.

"We think of the Ukrainian people in the line of fire. We think of the young people who will die because of Russian aggression, unnecessarily. In no way is this justifiable by any yardstick."

Ireland stands in solidarity with the Ukrainian people in their darkest hour.

We will support the imposition of comprehensive and severe sanctions on Russia.#Ukraine #EUCO pic.twitter.com/mBudOgqG99

Martin told RTÉ News that the sanctions "won’t halt what Russia is doing in Ukraine now" but said they represent a "fundamental shift" in the EU's attitude to Russia.

EU foreign ministers will meet on Friday to finalize a range of sanctions to ensure that Putin "must and will fail", including measures that block Russia's access to technologies.

However, EU leaders have decided not to cut Russia off from the SWIFT global interbank system for now.

Meanwhile, US President Joe Biden unveiled a range of new sanctions against Russia on Thursday night in response to the invasion, including sanctions against banks and state-owned measures and imposing measures to thwart Russia's ability to do business in the world's major currencies.

Biden accused Putin of violating international law and ignoring western attempts to engage in dialogue by launching a "premeditated attack" on Ukraine.

"Putin is the aggressor. Putin chose this war. And now he and his country will bear the consequences," Biden said on Thursday night.

Biden added that NATO will meet on Friday to discuss further measures.

Biden reiterated that US forces will not enter the war in Ukraine but announced that he had authorized US troops that had been on standby to be deployed to Germany.

British Prime Minister Boris Johnson told the House of Commons that world leaders had already agreed to work together to "maximize the economic price" that Russia will face.

Reuters reports that Russia has hit 33 civilian sites in just 24 hours since launching the invasion, while Ukrainian officials have confirmed that Russian forces have taken control of the Chernobyl nuclear facility following a fierce battle on Thursday.

The Ukrainian Nuclear Agency has reported increased levels of radiation at Chernobyl, which is the site of the world's worst nuclear disaster.

A small number of Russian troops have reportedly reached the outskirts of the Ukrainian capital Kyiv, with gunfire reported in the government district of the city.

Air raid sirens were also heard once again in the capital on Friday morning.

At least 137 Ukrainian soldiers were killed by the end of the first day of the conflict on Thursday, Ukrainian President Volodymyr Zelenskyy said.

Ukrainian presidential advisor Mykhailo Podolyak said the country is ready for peace talks with Russia, including on neutral status regarding NATO and the EU.

"If talks are possible, they should be held. If in Moscow they say they want to hold talks, including on neutral status, we are not afraid of this," Podolyak said. "We can talk about that as well.

"Our readiness for dialogue is part of our persistent pursuit of peace."

Ukraine is currently not a member of NATo or the EU but is seeking to join both.