The Sullivan brothers, who were all killed on the same day during WWII and had roots in Co Cork, were commemorated at an Irish in Europe Remembrance event in Brussels. 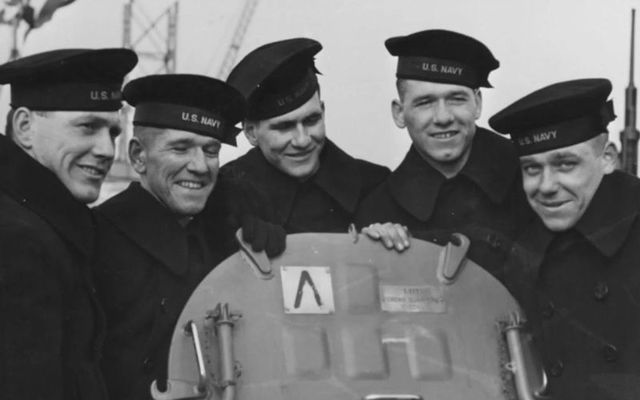 The Irish in Europe Association (International) AISBL organized the Irish in Europe Remembrance commemoration on November 12 which featured remarks, poetry readings, and a wreath-laying at the Anglo-Belgian War Memorial in Brussels.

The five Sullivan brothers, natives of Iowa, were killed on November 13, 1942, while serving together aboard the USS Juneau in the US Navy during World War II.

The Sullivan brothers were remembered by the US Navy through the commissioning of USS The Sullivans (DD-537), a Fletcher-class destroyer, in September 1943. This was the first time a US Navy ship was named after more than one individual. The ship is now an exhibit at The Buffalo and Erie County Naval & Military Park in upstate New York.

In a statement, the Mayor of the County of Cork Cllr. Danny Collins paid tribute to the Irish Americans upon the 80th anniversary of their deaths: “The Irish Diaspora stands at over 75 million people around the globe, with approximately 40 million alone living in the USA; many millions also live in Europe and further beyond.

“There are times when people realise their calling in the interests of the common good; this is particularly so, in times of War. While we commemorate the Irish of 100 years ago with regard to the centenaries of the Anglo-Irish War of Independence and Irish Civil War, it is also most apt that we remember those with Irish heritage who gave their lives in each and every conflict in our history, both living and recalled.

“World War II was one such conflict that saw countless numbers of people with Irish heritage fight for the common good; perhaps few are as well known as the five Sullivan brothers – Al, Frank, George, Joe, and Matt – whose ancestors left Adrigole in West Cork during An Gorta Mór, arriving in the USA in the year of 1849.

“The five brothers lost their lives together, 80 years ago, on 13 November 1942. This was aboard the naval ship Juneau, which was struck during the Naval Battle of Guadalcanal in the South Pacific Ocean. As a mark of respect, the US Navy named one of their new ships the USS Sullivans (DD537) in April 1943.

“West Cork remembers these men and there is a permanent memorial to the brothers at Trafrask, just outside of Adrigole.

“The Irish in Europe, the Irish in America, the Irish at home, and the Irish further afield, collectively remember together, the passing of the Sullivans, on this the 80th anniversary of that fateful day on 13 November 1942.”

In an address during the event in Brussels, Denis J. Buckley, the International President of the Irish in Europe Association, remarked how the Sullivan brothers were a part of this long Irish tradition of enlistment with the US Navy.

Buckley noted how he has written to Ireland's Taoiseach Micheál Martin and Minister for Foreign Affairs Simon Coveney urging them to mark the 85th anniversary of the Sullivans' deaths with an Irish postage stamp.

Elsewhere during the event, US Army Colonel Edward J. Dupont, representing the US Embassy in Brussels, read a letter issued by Quentin Hart, the mayor of Waterloo, Iowa, where the Sullivan brothers were all born. Mayor Hart said Waterloo remains "proud to be home of the Five Sullivan Brothers."

Col Dupont joined Robert Kahn, a representative of the Irish / Irish American Diaspora in Europe, in the joint laying of a laurel wreath in the colors of the flags of the US and Ireland in memory of the five Sullivans and all Irish who died in all wars, conflicts, and UN missions in all armies.