One woman whose sister died on active duty as a search and rescue pilot was incensed at their behavior. 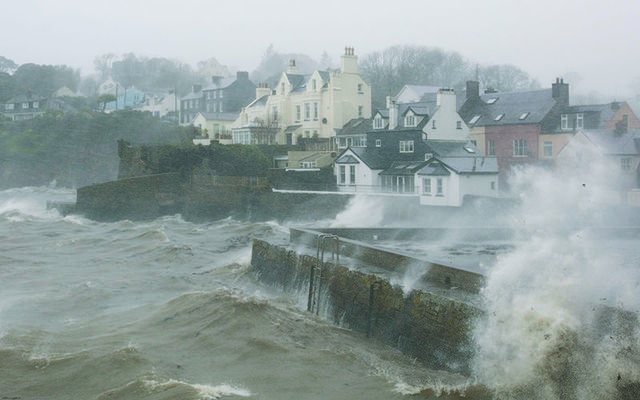 The coast of Ireland has been buffeted by roaring waves Rollingnews.ie

People in Ireland are calling for Storm Ophelia’s risk-takers to be prosecuted for endangerment.

There have been reports from all around Ireland of people taking to the sea as if it was as calm and balmy as the Mediterranean in June.

The west coast was pummeled by Storm Ophelia, but in Galway a garda (policeman) told RTÉ that people continued to ignore their warnings about staying inside during the storm.

“People are still are still walking on the [Salthill] prom with children and animals,” the frustrated public servant sighed.

“A number of people have gone in swimming, just refusing to take our advice at the moment and, bar pulling them off the prom, there’s not much we can do.”

To the east, in Drogheda, Co Louth two men kitesurfing were pulled out of the water by gardaí who thought they were in trouble. They say they weren’t and one told the Liberal.ie he is planning a formal complaint against those who forced him out of the water.

Along the south Dublin coast two seven-year-old children were stopped from taking a dip with flippers at Seapoint and in Killiney a man was reported as about to enter the sea in conditions the Dún Laoghaire Coast Guard bluntly described as “horrendous.”

Niamh FitzPatrick, sister of Dara FitzPatrick, who died on active service as a rescue pilot, told Today FM, “I was just so incensed yesterday…  when I heard reports of people out and about… When you do lose someone who’s in search and rescue or maybe firefighting, gardaí, ambulance, RNLI, mountain rescue, when you lose someone who has lost their life while they go to help somebody else, that’s tough in itself, but to know that that would happen needlessly is just… it’s unbelievable to be honest with you.”

Social media was awash with people calling for individuals who put the lives of service personnel to be arrested.

Don't know if it's legit but I have intuitive sympathy for argument that people who do this should face legal penalty #Ireland #StormOphelia https://t.co/GvV3wmEp9a

#Ophelia is there anyway we can introduce a stupidity law to arrest the gobshites who swam during the massive storm in Galway?? #morons

Arrest those stupid clowns. Emergency services have enough to do. #Ophelia

Arrest and/or fine the morons swimming in Salthill #Ophelia #Galway

Do you think people who head out in dangerous weather should face prosecution? Tell us in the comments below.