Four weather warnings issued across Ireland ahead of Storm Jorge

Storm Jorge is set to deliver wind gusts and potential flooding across Ireland in the coming days. 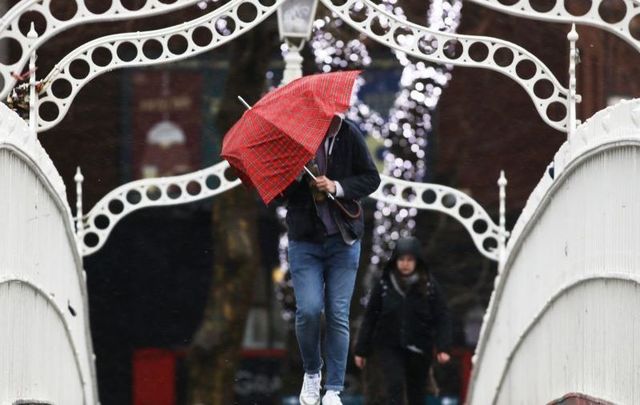 Storm Jorge is set to deliver wind gusts and flooding across Ireland in the coming days. RollingNews.ie

Storm Jorge is set to hit Ireland in coming days and bring with it wind gusts of up to 130 km/h and the threat of flooding to parts of Ireland which are already struggling after higher-than-average rainfall throughout February.

Storm Jorge, named by the Spanish Met Office, is the third major storm to batter Ireland in February, following in the footsteps of Storm Ciara and Storm Dennis.

Ahead of Storm Jorge, Met Éireann warns: “Prepare yourself in an appropriate way depending on location and activity. All people and property in the affected areas can be significantly impacted. Check your activity/event and delay or cancel as appropriate.”

“Be aware about meteorological conditions and check if you are exposed to danger by nature of your activity or your specific location. Do not take any avoidable risks.”

Here are the weather warnings Met Éireann has issued for Ireland on February 27:

Some severe winds expected during Saturday associated with Storm Jorge (Hor-hay). Southwest quickly veering west and later northwest will reach mean speeds of 65 to 80km/h with gusts of 110 to 130km/h, possibly higher in very exposed areas with an elevated risk of coastal flooding.

Southwest quickly veering west and later northwest will reach mean speeds of 65 to 80km/h with gusts of 110 to 130km/h, possibly higher in very exposed areas with an elevated risk of coastal flooding.

Rainfall accumulations of 20 to 30mm expected during Friday and Saturday generally but 40 to 50 mm in parts of Kerry, with a continuing risk of flooding due to already saturated ground and elevated river levels.

A band of very strong winds, associated with storm Jorge (Hor-hay) will extend across the country during Saturday morning and persist through the rest of the day and into the night.

Southwest veering westerly winds of mean speeds 50 to 65km/h with gusts of 90 to 110km/h expected.

A Marine Craft Warning was also issued by Met Éireann:

South to southeast winds will increase to force 6 or 7 tonight on all coasts of Ireland, veering southwesterly Friday morning.

Read More: Weather warnings in place in parts of Ireland ahead of Storm Dennis

Here’s the national forecast for the coming days from Met Éireann:

Friday, February 28: Friday will be a cloudy day with rain extending countrywide during the morning, with some heavy falls in the west and south. Some sleet or hill snow possible in parts of Ulster in the early morning. Milder than recent days with afternoon temperatures ranging 7 to 11 degrees Celsius generally, but cold in Ulster until later in the evening. Fresh to strong and gusty southeasterly winds will veer southwesterly through the day.

Temperatures will remain elevated after dark on Friday night with scattered outbreaks of rain and drizzle. The rain will turn heavy and persistent for a time overnight, before clearing eastwards towards morning, followed by clearer and much colder conditions. Southerly winds will veer southwesterly and become fresh to strong and gusty. Lowest temperatures of 1 to 3 degrees Celsius, occurring near dawn.

On Saturday, Storm Jorge will impact Ireland with strong winds and heavy rain expected. It will be a cold day with widespread showers and coastal gales. Showers will be mainly confined to the west and south during the morning, but will become widespread as the day goes on, and will be a mix of rain, hail, sleet and possibly snow. There will also be a risk of thunder. Daytime temperatures of just 3 to 6 degrees Celsius, in strong and gusty southwesterly winds.

There will be bright spells and further wintry showers on Sunday. More persistent rain will affect south Munster and south Leinster, possibly turning to sleet or snow on higher ground. Cold, with the highest afternoon temperatures of 4 to 7 degrees Celsius. Strong southwesterly winds in the northwest at first, easing by evening.

Sunday night will be cold and dry across much of the country, with scattered showers mainly in the west and northwest, turning wintry at times. Lowest temperatures of minus 1 to plus 2 degrees Celsius, in moderate west to southwest winds.

Monday will be a cold day with sunny spells and scattered showers, turning wintry at times. Highest afternoon temperatures of 4 to 7 degrees, in moderate to fresh and gusty westerly breezes.