Flights have been canceled and tourist attractions closed as Ireland braces itself for more heavy rainfall and high winds on Wednesday. 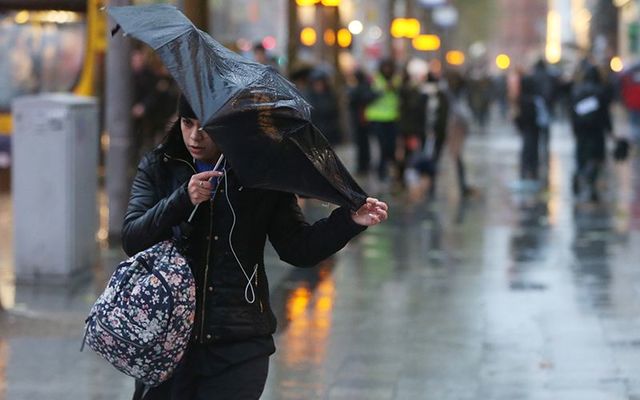 Flights have been canceled and tourist attractions closed as Ireland braces itself for more heavy rainfall and high winds on Wednesday.

Severe weather warnings have been put in to effect for western and southern coastal areas of Ireland with dozens of flights from Cork and Dublin airports canceled, tourist attractions and several roads closed, with gusts reaching up to 130km/ph.

Ireland’s metrological service, Met Éireann, has said that Storm Diana would produce severe and damaging winds. An Orange Warning is in effect with winds forecast to reach between 65 and 80 kilometers per hour gusting between 110 and 130 kilometers per hour in Wexford, Galway, and Clare where the Orange warning comes into force at 9am and will conclude at 2pm this afternoon.

A Yellow Wind Warning is also in place for the rest of the country until 6pm, with gusts of up to 110 kilometers per hour.

We strongly advise the public to stay away from exposed beaches, cliffs, piers and promenades along the coast today.
Remember to Stay Back, Stay High and Stay Dry!
If you see someone in difficulty in the sea or on the shore dial 999 or 112 and ask for the Coast Guard #StormDiana pic.twitter.com/jsllLNIPIz

The storm will move northwards to the west of Ireland.

Storm Diana was named by the Portuguese meteorological service due to the orange level warning conditions it produced for the Azores archipelago, in the Atlantic Ocean, on Monday night.

On Wednesday morning over 6,000 homes and businesses were without power. The Electricity Supply Board (ESB) reported faults in counties Cork, Tipperary, Kerry, Dublin, Kilkenny, Waterford, Roscommon, and Louth.

Those traveling by air are urged to check with their airline before traveling to any airport in Ireland.

Police are already reporting debris on the Cork to Dublin (N8) motorway, near Glanmire. High winds have brought down a number of trees around Cork city and county. There are also flood warnings on some quays in Cork city.

They have also urged drivers to show caution and patience.

Water kissing the quayside in the city centre in #Cork. Thankfully, high tide has passed with only minor spot flooding on the streets. #StormDiana @rtenews pic.twitter.com/6S0u3H7N0u

Ireland's Office of Public Works has also been affected by the storm. On Wednesday morning they announced the temporary closure of Tipperary’s Rock of Cashel and the Fota Arboretum and Gardens.

The Battle of the Boyne Visitor Centre has also issued a statement recommending that people avoid the area:

"Please be aware, we have had reports of a fallen tree on the Boyne Canal Towpath. We are currently assessing and will update you in due course. As the forecast is for high winds again today, we recommend avoiding the area."

Have you or your family been affected by Storm Diana? Let us know in the comments section below.