The shipwreck of the SS Mesaba, which sent an ice warning to the Titanic, has been discovered in the Irish Sea more than 100 years after it was torpedoed by a German U-Boat. 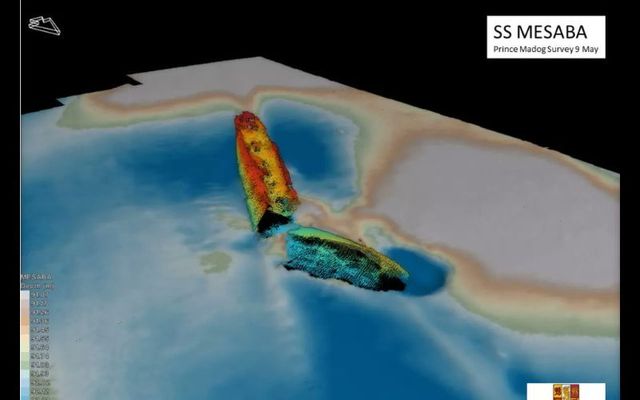 The SS Mesaba was torpedoed by U-118 while making a convoy voyage from Liverpool to Philadelphia. 20 lives were lost, including that of the ship' commander. Bangor Unviersity

The SS Mesaba, the ship which sent an iceberg warning to the RMS Titanic before the ocean-liner sank, has been identified lying in the Irish Sea, researchers at Bangor University and Bournemouth University announced on September 27.

In April 1912, the merchant steamship SS Mesaba was crossing the Atlantic and sent a warning radio message to the RMS Titanic. The message was received but never reached the bridge. Later that night, the supposedly unsinkable Titanic hit an iceberg and sank on her maiden voyage, taking 1,500 lives and becoming the world’s most infamous shipwreck.

The SS Mesaba continued as a merchant ship over the next six years before being torpedoed in the Irish Sea whilst in convoy in 1918.

Now, using state-of-the-art multibeam sonar, researchers at Bangor University in Wales have finally been able to positively identify the wreck and have revealed SS Mesaba's position for the first time.

Powerful new technology has found the ship that sent a warning to the #Titanic lying in the Irish Sea...

The SS Mesaba was one among 273 shipwrecks lying in 7500 square miles of Irish Sea, which were scanned and cross-referenced against the UK Hydrographic Office’s database of wrecks and other sources.

It was thought that 101 wrecks were unidentified, but the number of newly identified wrecks was far higher, as many, the SS Mesaba included, had been wrongly identified in the past.

Details of all the wrecks have been published in a new book, "Echoes from the Deep" by Dr. Innes McCartney of Bangor University, conducted under a Leverhulme Fellowship while at Bournemouth University.

Dr. Michael Roberts who led the sonar surveys at Bangor University’s School of Ocean Sciences, explained: “The expertise and unique resources we have at Bangor University, such as the ‘Prince Madog,’ enable us to deliver high-quality scientific research in an extremely cost-effective manner. Identifying shipwrecks such as those documented in the publication for historical research and environmental impact studies is just one example of this.

"We have also been examining these wreck sites to better understand how objects on the seabed interact with physical and biological processes, which in turn can help scientists support the development and growth of the marine energy sector.”

The SS Mesaba and the RMS Titanic

On April 14, 1912, the Mesaba was among the vessels that sent ice warnings to the Titanic. According to Encyclopedia-Titanica, Mesaba's wireless operator Stanley Adams sent the following message at 7:50 pm:

Encyclopedia-Titanica notes that the message was received at 9:40 pm, by which time second operator Harold Bride had gone to bed and Jack Phillips was alone at the key, which might be why the message was never relayed to the bridge.

Two hours after Mesaba's message was received, the Titanic struck an iceberg and sank. More than 1,500 people died in the tragedy.

On September 1, 1918, SS Mesaba was torpedoed by the German U-118 and sank in St. George's Channel while making a convoy voyage from Liverpool to Philadelphia in ballast. 20 lives were lost, including that of the ship's commander.