Photos of the iceberg that the Titanic allegedly struck were released in 2012 to mark the centenary of the disaster. 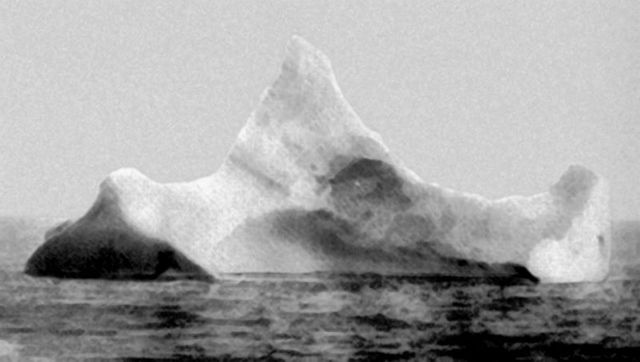 The iceberg suspected of having sunk the RMS Titanic. This iceberg was photographed by the chief steward of the liner Prinz Adalbert on the morning of April 15, 1912, just a few miles south of where the “Titanic” went down. The steward hadn't yet heard about the Titanic. What caught his attention was the smear of red paint along the base of the berg, indication that it had collided with a ship sometime in the previous twelve hours. This photo and information was taken from "UNSINKABLE" The Full Story of RMS Titanic written by Daniel Allen Butler, Stackpole Books 1998. Other accounts indicated that there were several icebergs in the vicinity where the TITANIC collided. The chief steward of the liner Prinz Adalbert / Public Domain

On April 14, 1912, the Titanic tragically struck an iceberg in the cold Atlantic Ocean despite receiving seven warnings throughout the day of the imminent danger.

Editor's note: In the early hours of April 15, 1912, the RMS Titanic sunk having struck an iceberg while en route to New York. Those icy waters claimed the lives of 1,517 people. The White Star Liner, built in Belfast, stopped off at Queenstown (present-day Cobh) on April 11 and then continued on its journey to New York. The "unsinkable" ship struck the iceberg on April 14.

Britannica reports on the tragic turn of events that led to the disastrous collision: "Throughout much of the voyage, the wireless radio operators on the Titanic, Jack Phillips, and Harold Bride had been receiving iceberg warnings, most of which were passed along to the bridge. The two men worked for the Marconi Company, and much of their job was relaying passengers’ messages."

"On the evening of April 14, the Titanic began to approach an area known to have icebergs. Smith slightly altered the ship’s course to head farther south. However, he maintained the ship’s speed of some 22 knots."

"At approximately 9:40 PM the Mesaba sent a warning of an ice field. The message was never relayed to the Titanic’s bridge."

"At 10:55 PM the nearby Leyland liner Californian sent word that it had stopped after becoming surrounded by ice. Phillips, who was handling passenger messages, scolded the Californian for interrupting him."

"Two lookouts, Frederick Fleet and Reginald Lee were stationed in the crow’s nest of the Titanic. Their task was made difficult by the fact that the ocean was unusually calm that night: because there would be little water breaking at its base, an iceberg would be more difficult to spot. In addition, the crow’s nest’s binoculars were missing."

"At approximately 11:40 PM, about 400 nautical miles (740 km) south of Newfoundland, Canada, an iceberg was sighted, and the bridge was notified. First Officer William Murdoch ordered both the ship “hard-a-starboard”—a maneuver that under the order system then in place would turn the ship to port (left)—and the engines reversed. The Titanic began to turn, but it was too close to avoid a collision."

Photos of the iceberg that may have sunk the Titanic became available as the world commemorated the 100th anniversary of the liner’s sinking in 2012.

One of the most striking images of the disaster, the picture has been preserved by Topham Picturepoint/Press Association Images and shows the iceberg, which the Titanic plowed into at 11:40 pm on April 14, 1912. 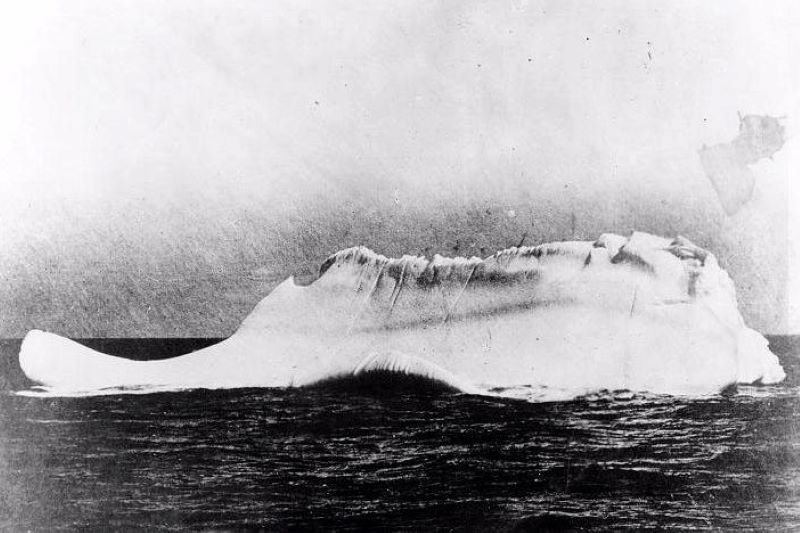 The iceberg with which the RMS TITANIC supposedly collided on April 14, 1912. This print was in possession of Captain De Carteret, the Captain of the Cable ship MINIA, reportedly stated that this was the only iceberg near the scene of the collision. The MINIA was one of the first ships to reach the scene following the disaster. It was dispatched after the Western Union Cable ship MACKAY BENNET by White Star Lines to recover debris from the Titanic. During this operation, the MINIA found debris and bodies floating in the vicinity of the above iceberg. Therefore, it is assumed that this is the iceberg that the TITANIC struck. Captain De Carteret gave the print to Captain A. L. Gamble, Commanding Officer of the USCGC SENECA. (Public Domain)

The iceberg lay at latitude 41-46N, longitude 50-14W, off the coast of Newfoundland. Newspaper reports of the time said that the visible part of the iceberg – that above the waterline – was anywhere between 50 to 100 feet high and 200 to 400 feet long.

The chief steward on board the Prinze Adelbert liner took the photo of the iceberg on the morning of the Titanic sinking.

Reports say he spotted a line of red paint along the bottom of the iceberg which experts believe show where it had made contact with Titanic.

TheJournal.ie reported that the steward was not aware at the time that it had been the iceberg that sunk the Titanic but the location, the marks on the iceberg, and Titanic survivors’ descriptions of the iceberg triangulated to confirm that it was.