As we rmark the anniversary of this tragedy, we take ourselves inside the Titanic with these sonar images. 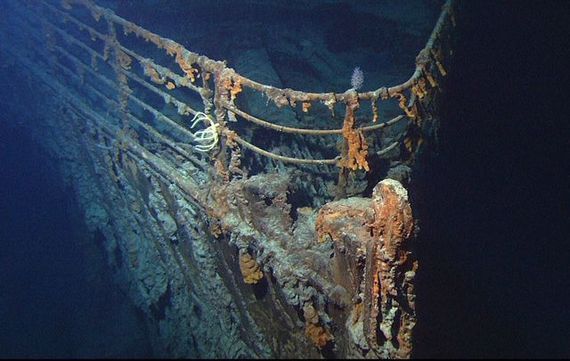 The Titanic's bow on the ocean floor. Public Domain

On April 15, 1912, the Titanic sank, killing over 1,500 people. As we mark the anniversary of this tragedy, we take ourselves inside the Titanic with these sonar images.

New sonar images show the sunken Titanic 12,500 feet below sea level. The April edition of National Geographic Magazine in 2012 featured these images for the first time to honor the centenary of the tragic ship’s sinking.

Previously, images of this nature, taken far under the Atlantic Ocean’s surface, were dark and dim but these images reveal the full extent of the wreckage. They also show the five-by-three-mile field of debris surrounding the wreck as well as the staircases at the stern of the boat.

The surrounding area on the seabed is also pitted with craters, from boulders from the iceberg sinking to the ocean floor.

These images, created by the Woods Hole Oceanographic Institution (WHOI), in Massachusetts, took months to create.

Bill Lange of WHOI said, "Now we know where everything is. After a hundred years, the lights are finally on."

The project sent three robots down to the Titanic. They moved along the length of the ship and captured thousands of images with optical cameras and sonar devices.

“Now we have a site that can be understood and measured, with definite things to tell us. In years to come, this historic map may give voice to those people who were silenced, seemingly forever, when the cold water closed over them.”

You can read more about the Irish connection with the Titanic here.