OceanGate Expeditions released the "first-of-its-kind" 8K footage on its YouTube channel, stating that the ship's bow, portside anchor, hull number one, and an enormous anchor chain can all be seen. 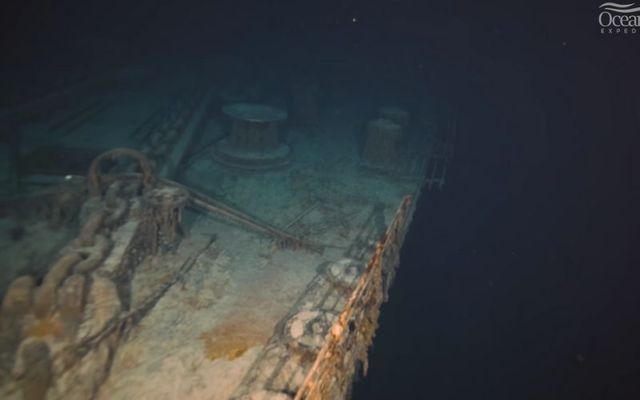 New footage of the Titanic shows an "astonishing level of detail", according to a company that embarked on a voyage to the famous wreckage.

OceanGate Expeditions released the "first-of-its-kind" 8K footage on its YouTube channel, stating that the ship's bow, portside anchor, hull number one, and an enormous anchor chain can all be seen.

OceanGate's Rory Golden remarked that one of the most amazing clips in the footage is of a single-ended boiler, which fell to the ocean floor when the Titanic broke in two.

"Notably, it was one of the single-ended boilers that was first spotted when the wreck of the Titanic was identified back in 1985," Golden told Sky News.

The veteran Titanic explorer said the name of the ship's anchor maker - Noah Hingley and Sons - is still visible along the side of the portside anchor.

"It is exciting that, after so many years, we may have discovered a new detail that wasn't as obvious with previous generations of camera technologies."

OceanGate said the new footage showed slight changes to the wreckage compared to a mission last year. The company said experts will now examine the footage to determine the rate of decay.

"The amazing detail in the 8k footage will help our team of scientists and maritime archaeologists characterize the decay of the Titanic more precisely as we capture new footage in 2023 and beyond," OceanGate said in a statement.

The Titanic Expedition was carried out over the course of eight days in May and June this year, with each "Mission Specialist" seat costing $250,000 - a $125,500 increase from last year's expedition.

Explorers began their journey from St. John's in Newfoundland before traveling 370 miles on an expedition vessel to the site of the Titanic wreckage.

From there, archaeologists and citizen explorers boarded OceanGate's carbon fiber and titanium Cyclops-class submersible to visit the wreckage on the ocean floor. Each dive lasts between eight to ten hours.