Donegal residents will have the best view of the deep partial solar eclipse over Ireland on the morning of June 10. 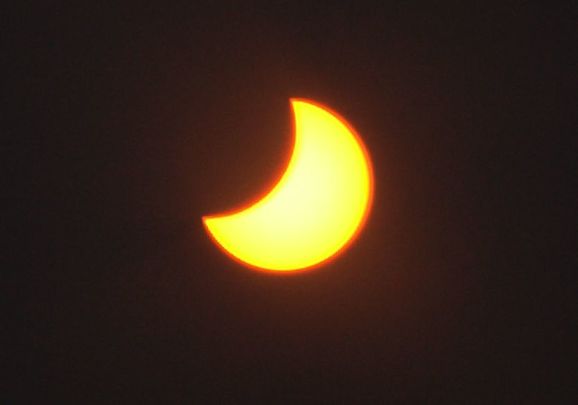 The sun will be covered by the moon in the deepest partial eclipse since March 2015 this week and a comparable celestial event will not be seen again until March 2025, according to experts.

Astronomy Ireland's chairman and editor David Moore has said that Donegal residents will have the best view of the solar eclipse on Thurs, June 10, between 10 am and 12:30 pm Irish time.

Speaking to BreakingNews, he said that a deep partial eclipse of this type has not occurred since March 20, 2015, and would not be seen again until March 29, 2025.

Moore said: "Given this is the best eclipse in a decade, everyone in Ireland should make sure they witness it over the two and a half hours that it will take place."

He continued by explaining that the “maximum eclipse will occur a few minutes after 11 am with up to 45 percent of the sun's diameter being covered from Donegal, other places in Ireland will see at least 40 percent of the sun covered.

“Given the Irish weather, it is important to note that you can see the eclipse for over two hours, so even if the weather forecast isn't great, plan to watch the entire event, in the hope of seeing something."

A solar eclipse occurs when a portion of the Earth is engulfed in a shadow cast by the Moon which fully or partially blocks sunlight.

Moore jokingly told the Irish Mirror "We've told all the adults to take the day off work. It’s a two-and-a-half-hour spectacle of nature. You won't see anything better until 2025.”

A full solar eclipse is far rarer. In fact, Moore says the last total eclipse in Ireland was recorded in 1724. The next full eclipse will occur on September 23, 2090.

The eclipse will be most pronounced in the North West of the country and will cover 29 percent of the surface of the sun.

This type of eclipse is known as an annular eclipse and occurs when the Moon covers the sun's centre but forms a “ring of fire” on its outer edge. However, this phenomenon will not be visible in Ireland.

Safe viewing is essential, experts advise that you should never look directly at the sun and never use any binoculars or telescopes. The only safe way to avoid permanent eye damage is to use specially designed eclipse glasses.

Here is a visualization of the 2021 solar eclipse, from NASA:

Moore told the Mirror about how in "ancient times" astronomers had come to the realization that eclipses are simply the moon passing in front of the sun.

He said “Back in ancient times, they weren't so sure and very superstitious. In fact, as one story about, I think it was two Chinese court astronomers who failed to predict a total eclipse of the sun.

"Of course, when you have a total eclipse of the sun, which is not what we're getting on Thursday, our last one was in 1724, but when you do get one day turns to night.

"In fact, the Chinese used to think it was a dragon gobbling the sun, and they'd all turn out in force and bang pots and pans to scare the dragon away, and since the maximum eclipse you can ever get is seven minutes, it always worked.

"So two court astronomers failed to predict one eclipse, and the emperor had them beheaded. So we are always careful to predict eclipses. We don't want that happening to us.”