Lunar eclipse was welcomed by Celts in ancient times (VIDEO)

Lunar eclipses were not something to fear but were associated with the rabbit and the hare, symbols of fertility. 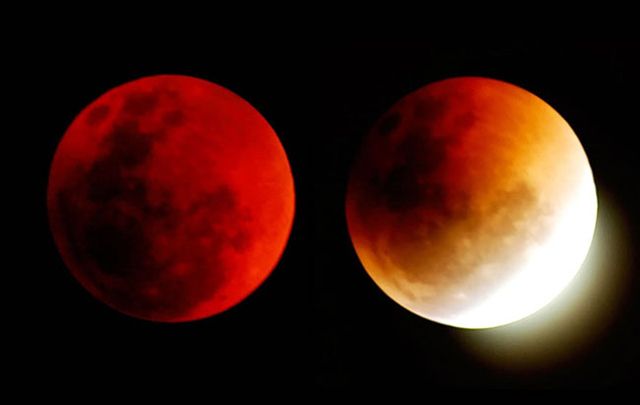 Lunar eclipse was welcomed by Celts in ancient times. A total lunar eclipse is also called a blood moon for its red glow. Google Images

Lunar eclipses were very important to the ancient Celts. In their book “Timeless Wisdom of the Celts,” Steve Eddy and Claire Hamilton explain that the Celts were more influenced by the moon than the sun. Lunar eclipses were not something to fear but were associated with the rabbit and the hare, both symbols of fertility.

Many historians believe the Celts created a “festival of light” to welcome an eclipse, which they were capable of predicting.

Steve Eddy and Claire Hamilton write, “To the Celts, time was circular rather than linear.

"This is reflected in their commencing each day, and each festival, at dusk rather than dawn, a custom comparable with that of the Jewish Sabbath.”

The Celts even had their own moon-God. In Irish mythology, Elatha or Elathan (modern spelling: Ealadha) was a prince of the Fomorians and the father of Bres by Eri of the Tuatha Dé Danann.

The imagery surrounding him (he visits Ériu at night by sea on a silver boat) suggests he was their moon god.

The preoccupation with the nighttime was also reflected in their year beginning with the festival of Samhain on October 31 when nature appears to be dying down.

Tellingly, the first month of the Celtic year is Samonios, ‘Seed Fall’: in other words, from death and darkness springs life and light. Caesar confirms this and offers an explanation (Conquest of Gaul, VI.18):

"The Gauls claim all to be descended from Father Dis [a god of death, darkness, and the underworld], declaring that this is the tradition preserved by the Druids. For this reason, they measure periods of time not by days but by nights; and in celebrating birthdays, the first of the month, and new year’s day, they go on the principle that the day begins at night."

Another reason for the importance of night in the Celts’ reckoning of time lies in their regard for the moon and the feminine principle which it represents.

Certainly, there is some evidence that they observed the solar festivals of solstices and equinoxes, and especially the summer solstice. It is also true that the Druids’ most sacred plant, mistletoe, was associated with the sun. However, the waxing and waning of the moon were of far greater importance.

The Celts showed their respect for the moon by using euphemisms such as gealach – meaning ‘brightness,’ and never referring directly to ‘the moon.’

Manx fishermen followed this custom up until the nineteenth century, referring to the moon as Ben-rein Nyhoie – ‘queen of the night.’

More persuasive, however, is the evidence to be found in the Celtic calendar. The earliest-known Celtic calendar is the Coligny calendar, now in the Palais des Arts in Lyon, France.

It dates probably from the 1st century BC and is made up of bronze fragments, once a single huge plate. It is inscribed with Latin characters but in Gaulish.

It begins each month with the full moon and covers a 30-year cycle comprising five cycles of 62 lunar months, and one of 61. It divides each month into fortnights rather than weeks, with days designated – from observation – as MAT (good) or ANM (not good).