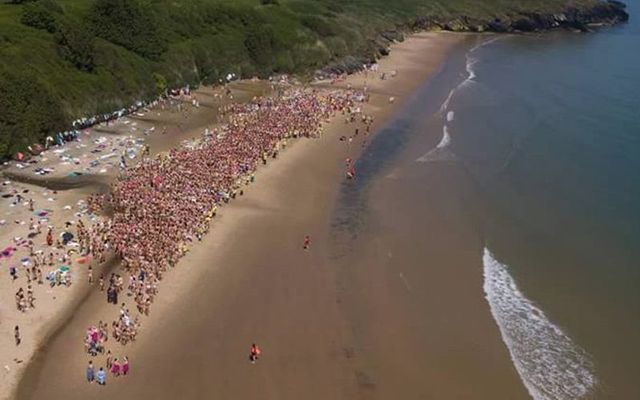 Women of all ages, from late teens to mid-80s took over the secluded beach to break the Guinness World Record for the largest skinny dip while raising funds and awareness for the children’s cancer charity. Many of the participants were cancer survivors who were using the naked swim to boost their self confidence in defiance of their mastectomy scars. Others took part to honor those loved ones they had lost to cancer.

All funds raised will go to, Aoibheann's Pink Tie, a national children’s cancer charity which supports the families of children diagnosed with cancer.

More than 2,500 women have stripped naked to break the world record for the largest ever skinny dip. pic.twitter.com/tmAa8zIk7a

The organizer of the outlandish event, Dee Featherstone, told the Irish Sun the numbers had exceeded all expectations. She said:

"I thought we might get 1,500 but it just got bigger and bigger.

The whole beach was just awash with us – it was just incredible.

It was very empowering.”

The Irish nude bathers smashed the Guinness World Record by staying in the Irish Sea for five minutes. Their new record beats the previous record by a long shot when 786 people braved the seas naked in Perth, in Western Australia in 2015. The sea temperatures in Australia were ten degrees warmer than Ireland’s brisk 12C (53.6F).

This is the sixth year that Featherstone has organized the “Strip and Dip” for charity. Featherstone launched the first event in 2013 after undergoing surgery for breast cancer.

On the “Strip and Dip” site Deirdre wrote:

“With our laughter, scars, dodgy boobs or in a lot of cases only one or none… we would like to send a message that there is life after cancer and also raising awareness of how important it is for ladies to get checked.”

All money raised goes towards Aoibheann’s Pink Tie. You can read all about it and donate here.

Read more: New miracle cancer drug will be made in Ireland