Sinéad O'Connor said the death of her beloved son Shane O'Connor "sucks, totally sucks" in an emotional video on Twitter this week. 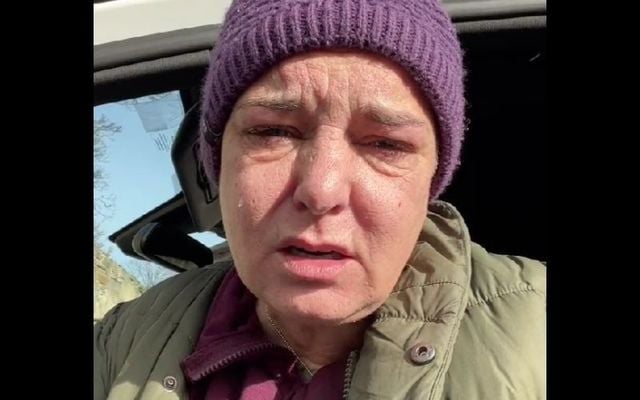 Sinéad O'Connor shared an emotional video on Twitter this week, two months since the death of her son Shane O'Connor. Sinéad O'Connor, Twitter

Sinéad O'Connor posted a heartbreaking video on Thursday morning, documenting her ongoing struggles since the death of her 17-year-old son Shane in January.

"Good morning. Lost count how many days it is now, what is it, second or third March, nearly eight bloody weeks," O'Connor said in the video.

"It doesn’t get any better. Still dead. Every morning that I wake up, he’s a bit more f**cking dead than he was the day before. It sucks, totally sucks."

O'Connor's son Shane was found dead in the Bray area of County Wicklow on January 8 after escaping suicide watch at Tallaght Hospital a day earlier.

He was laid to rest on January 15 following a "very lovely Hindu ceremony", O'Connor said on Twitter at the time.

In a tweet on Thursday evening, O'Connor said she has been in hospital since February 12, adding that the hospital staff love her too much "to let anything stupid happen".

She previously said she had been staying with her "best girlfriend" since Shane's funeral in January.

O'Connor revealed that she will keep a permanent place for Shane at the dinner table and said her son is "very present".

She also vowed to never perform live again following the death of her son as "there will never be anything to sing about again".

O'Connor was fiercely critical of the HSE, the Irish State, and child and family agency Tusla in the aftermath of Shane's death but has since deleted several tweets and apologized for "lashing out".

However, she posted an open letter to Taoiseach Micheál Martin on Friday demanding answers for her son's death and calling on the Irish State to be represented at all future funerals of any child that died while in the care of the state.

Letter for An Taoiseach… you can put the pages in the right order. The wrong woman’s kid just died on your watch. I want answers today. pic.twitter.com/cJECVi3fle