Should this County Down oak be voted the best tree in Europe?

Have your say and vote for “Old Homer” a 200-year-old tree in Kilbroney Park with an amazing history. 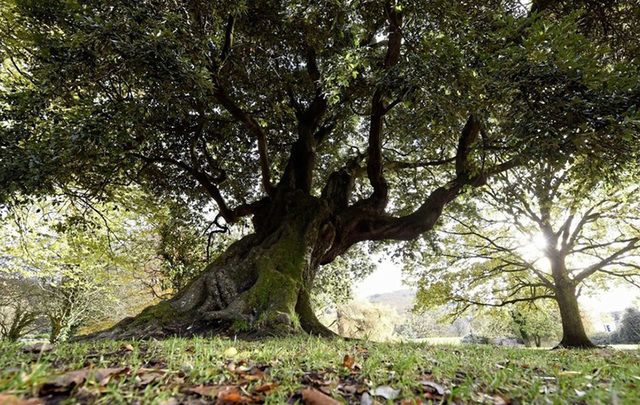 Have you say and vote for “Old Homer” a 200-year-old tree in Kilbroney Park with an amazing history.

Old Homer, a remarkable County Down oak, which was recently crowned Northern Ireland’s best-loved tree, is now competing for votes in the European Tree of the Year contest.

The holm oak, a mighty evergreen oak in Rostrevor’s Kilbroney Park, secured the title of Northern Ireland’s Tree of the Year in a competition organized by the Woodland Trust and was unveiled in a Channel 4 documentary Tree of the Year with Ardal O’Hanlon last December.

It now faces stiff competition from 15 other trees from as far away as Bulgaria. Run by the Environmental Partnership Association. The European verdict is simple – the tree with the most public votes at the end of February will win.

The 200-year-old oak in County Down is affectionately and locally known as ‘Old Homer’ and was nominated for the European award by Alistair Livingstone on behalf of LIGHT 2000 community group.

Alistair said “This tree has been well-loved by generations of locals and visitors who have gathered under its huge canopy for festivals and more.  We’ve worked hard to put ‘Old Homer’ in the spotlight, and indeed we’re determined to encourage an appreciation of the many remarkable trees within this park.  We really hope that members of the public will make their mark by way of a simple vote.”

Patrick Cregg, director of the Woodland Trust, added “Centuries-old, this striking natural landmark reaches out to visitors at Kilbroney’s Fairy Glen entrance.  And, while it distinctively leans at an angle, this oak is standing tall for all of Northern Ireland’s amazing, unsung trees.

“We’re appealing to everyone – right across the country and anyone you know wherever they are – to take a second to vote and give ‘Old Homer’ the backing he deserves.”

Today, Kilbroney Park is owned by Newry, Mourne and Down District Council, and is freely open to all.  It has, over the centuries, enjoyed its fair share of famous owners and visitors.  And, with breath-taking views overlooking Carlingford Lough, is said to have inspired CS Lewis’ magical land of Narnia.  The Trust hopes that the Belfast-born writer “would have been proud” of his boyhood haunt’s recent achievement.

The Woodland Trust wants to see greater protection for our notable trees.  More than 9,000 people throughout the United Kingdom have so far supported the charity’s V.I.Trees campaign, which calls for a register of Trees of National Special Interest.

To give the holm oak the European vote, head to www.treeoftheyear.org.  Voting ends on Feb 28 2017.

Great Old Homer in all its glory.

Here are some interesting facts, remarks and observations about this tree:

- A Holm / Holly Oak is not native to Ireland but hails from the Mediterranean. Its fruits, the acorn, are edible.

- The tree is evergreen and hardest and heaviest of all the oaks, with a snakeskin like bark.

- The tree has wonderful connection with the Rostrevor people. School classes, music sessions, wedding photos often take place under its boughs. Another regular visitors include courting couples and of course children ready for the challenge of climbing.

- The tree is 200 years old and in good health …apart from the lean.

- New reinforcing growth on the trunk will help endure the weight from the lean.

- Its girth is twice as wide on the trunk at 8-feet above ground, as on the ground.

- It acts as the scratching post for the Bowes - Lyons family's horses.

- It was planted by the Ross family in the Meadow around the time their famous son Major General Robert Ross led 5000 men, Sacked Washington and burned the Whitehouse 1814.

- The tree may have been climbed in by Queen Elizabeth II when she was 11-years-old and was visiting with the Queen Mother, at the Lodge in the Meadow, with their in-laws the Bows - Lyons Family.

-  Despite the fact that the tree has been climbed by the public for 200 years the bark has not been marked.

- It’s said that Old Homer has a human-like face formation on the large left fork.

- The Scottish musician Danny Kyle’s ashes are buried under the tree.

Read more: Celtic calendar and astrology was based on trees