The former Trump Press Secretary remained quiet as the Pope bluntly told Catholic politicians they should seek to build bridges not build walls. 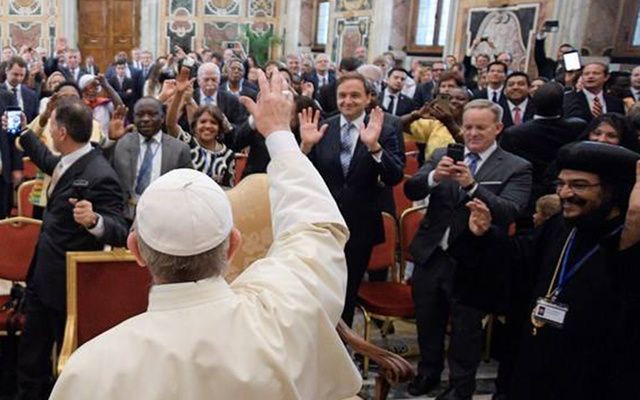 Pope Francis has met with Sean Spicer after all. The former White House Press Secretary and devout Catholic was controversially left of the guest list for President Trump’s visit to the Vatican a few months ago.

The 45-year-old Rhode Islander was received by the Holy Father when he hosted a meeting of the International Catholic Legislators Network.

The Vatican Radio Facebook page shared a picture of the two smiling at each other while the pontiff grasps the hands of a woman veiled from head to toe in black.

When Trump met the Pope in May, even journalists expressed surprise that he had been excluded from meeting the Pope. Maggie Haberman of the New York Times called his lack of an invite “needlessly harsh” and asked, “when else is Spicer likely to meet the Pope, and it mattered to him?”

This seems needlessly harsh - when else is Spicer likely to meet the Pope, and it mattered to him? https://t.co/jUtcTW8wbg

At the time the White House said there had been limited space on the trip and at the Vatican’s request they had limited the number of aides brought in to meet the Pope.

Two aides to the President and a further pair who worked for Secretary of State Rex Tillerson were included, but not Spicer, a man who regularly attends Mass and appeared on CNN with ashes on his forehead on Ash Wednesday.

Since his resignation last month, Spicer has remained tight-lipped about his treatment by the White House and declined to comment on his meeting with the Pope.

Pope Francis is reported to have told the ICLN that politicians should seek to build bridges rather than walls - a common refrain from him and a clear rebuke to Spicer’s former boss.

“The laws that you promulgate and apply ought to build bridges between different political perspectives: even when they respond to precise ends ordered to the promotion of greater care for the defenseless and the marginalized, especially the many who are constrained to leave their countries; and when they are in order to favor a correct human and natural ecology,” he urged those gathered to hear him speak.

Earlier this month key allies of Francis wrote in a Vatican journal that those Catholics and evangelicals who support Trump constituted “an alliance of hate” and that their desire for a “theocratic type of state” was “not too far apart” from Islamist jihadists.

The Pope is known to be quick to discipline those who displease him but in this instance the Vatican declined to either condemn or endorse the remarks.

Most took this to be a tacit endorsement and Massimo Faggioli, a professor in theology at Villanova University, told the New York Times he thought the article would likely, “be remembered in church history as one of the most important to understand the Vatican of Francis and the United States and American Catholicism.”