Sabina Higgins's letter to the Irish Times about the Ukraine - Russia war was published on her section of the President of Ireland's website, leading to confusion about the President's official stance. 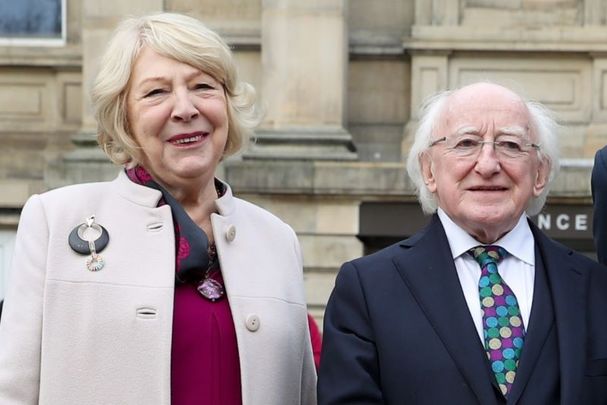 Sabina Higgins, the wife of President of Ireland Michael D. Higgins, has today, August 2, issued a statement after her letter in the Irish Times last week entitled "War in Ukraine: a moment of moral choice" was met with considerable controversy.

In a statement on Tuesday, Higgins explained: “For the last 11 years since coming to Áras an Uachtaráin as the wife of the President, I have continued my long standing interests on a number of important issues. Since 2014, I have had a dedicated section on the President.ie website.

“This section contains details of activities I have been undertaking including speeches and work towards the implementation of the United Nations’ Sustainable Development Goals, health issues, breastfeeding, issues affecting the Traveller Community, human rights, supporting the arts and a range of other issues.

“Last week I had been asked about my letter to the Irish Times, which I had written in a personal capacity, by a number of people who had missed it, and had not been able to access it online. I therefore put it on my dedicated section of the website as I have done for the last number of years.

“Having put my letter up, I subsequently took it down when I saw it being presented as not being from myself, but from the general President.ie website.

“I have from its outset strongly condemned the illegal Russian invasion of Ukraine and I cannot be but dismayed that people would find anything unacceptable in a plea for peace and negotiations when the future of humanity is threatened by war, global warming, and famine.”

The Journal reports that a note from the President’s office further said: “The letter in question was published on Sabina Higgins’ section of the President.ie website only and was not visible on any other part of the website. To view the article, a visitor had to click on the ‘Sabina Higgins’ link from the main page. At no time did the letter appear on any other part of the website.”

In her letter to the Irish Times, Higgins responded to the publication's July 19 editorial entitled “The Irish Times view on the war in Ukraine: escalating to stand still."

Higgins said she was "disappointed and dismayed" that the Irish Times "did not encourage any ceasefire negotiations that might lead towards a peace settlement between the Russians, the Ukrainian forces and the separatists."

She wrote: "Until the world persuades President Vladimir Putin of Russia and President Volodymyr Zelenskiy of Ukraine to agree to a ceasefire and negotiations, the long haul of terrible war will go on. How can there be any winner?"

Higgins's letter was met with mixed reactions amongst Irish politicians. TD Willie O’Dea, former defence minister, said it was "a bit naive," while Senator John McGahon said, "Sabina Higgins drawing a moral equivalence between Zelensky and Putin is disrespectful to the 47,000 Ukrainians refugees that have come to our country." TD Erin McGreehan said President Higgins should apologize or reconsider his position. The People Before Profit party said the attacks on Higgins were an example of "warmongering."

A spokesperson for the President of Ireland told the Irish Times on Monday that “President Higgins has been unequivocal in his condemnation of the Russian invasion of Ukraine."

Elsewhere, Yuriv Filatov, Russia's Ambassador to Ireland, told the Irish Times he agreed with some of Higgins's points: “Under the circumstances, [the letter] suggests that everything should be done to end the hostilities as quickly as possible.

“I wouldn’t want to intrude in internal affairs but the point of view, it makes sense. She’s against war. We’re all against war."

However, Kateryna Yushchenko, a former First Lady of Ukraine, said on Twitter that Higgins should not "weigh in on something you obviously know nothing about. As we in Ukraine will not tell your country what to do in your relations with England and Northern Ireland."