"We live in each other's shelter," Ireland says in its St. Patrick's Day video message to the people of Ukraine and people in crisis everywhere. 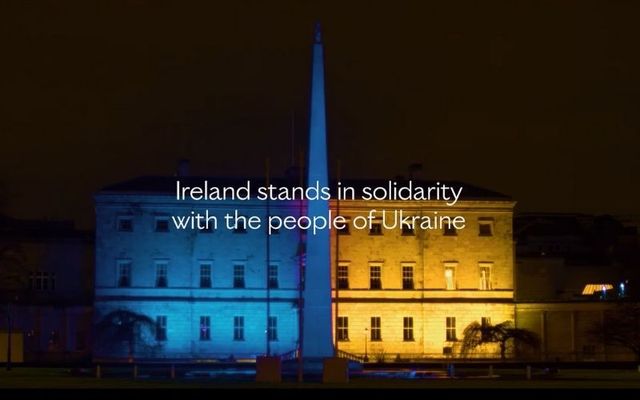 Ireland's Department of Foreign Affairs says that this year, the country is marking St. Patrick’s Day with solidarity rather than celebration and is expressing its Irish identity by re-dedicating itself to democratic and humanitarian values.

Ireland published a special St. Patrick’s Day video greeting to the world to mark its solidarity and offer its support to the people of Ukraine on March 16.

The video, backed by Paul Brady’s song "The Island," features text that reads: "We live in each other's shelter.

"Taking our place among the nations of the world

"Working every day with our partners in the international community

"A strong voice for justice, human rights, and peace."

The video then shifts to harrowing scenes emerging from Ukraine, which has been under Russian invasion for three weeks.

"On this St. Patrick's Day, Ireland stands in solidarity with the people of Ukraine and people everywhere in crisis," the video's text reads. "We are thinking of you today."

Indeed, Ireland's observance of its national holiday of St. Patrick's Day has taken a slightly different shape in wake of the situation in Ukraine.

Last week, Tourism Ireland announced it would not be promoting its annual "Global Greening" initiative where landmarks around the world light up green for St. Patrick's Day. Instead, Irish landmarks have been lit up in blue and yellow, the colors of Ukraine's flag, while Irish embassies and consulates have reportedly been encouraged to do the same.

Taoiseach Micheal Martin, who is in Washington, DC this week, is expected to discuss the situation in Ukraine with US President Joe Biden during their bilateral meeting on March 17, St. Patrick's Day.

On Tuesday, the Irish government announced that it had agreed to ramp up its humanitarian response in order to provide accommodation and other essential supports, as well as agreed to accept from Moldova up to 500 people who have fled from Ukraine given the extreme pressure being faced by Moldova in the current circumstances.

The Irish Times reported on Tuesday that more than 6,600 Ukrainians had already arrived in Ireland, with about a third now being accommodated in hotels.

The Irish government has launched an online hub for information regarding the situation in Ukraine and the Irish response, which can be accessed here.