"Why is he blowing his whole life’s work?" Blake Fleetwood, a longtime friend of RFK, Jr, who has taken a public anti-Covid vaccine stance, recently told the New York Times. 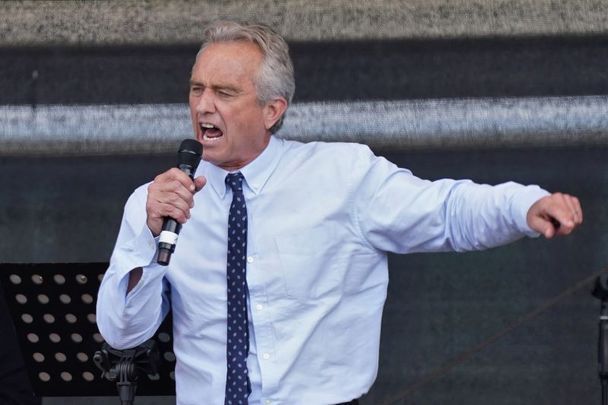 August 29, 2020: Robert F. Kennedy Jr., speaks to people from a wide spectrum, including coronavirus skeptics, conspiracy enthusiasts, right-wing extremists, religious conservatives, hippies and others gathered under the Victory Column in the city center to hear speeches during a protest against coronavirus-related restrictions and government policy in Berlin, Germany. City authorities had banned the planned protest, citing the flouting of social distancing by participants in a similar march that drew at least 17,000 people a few weeks ago, but a court overturned the ban. Getty Images

Friends and family of Robert F. Kennedy Jr. have publicly condemned him for his continued anti-vaccine rhetoric after he emerged as a leading voice in the campaign against vaccines during the Covid-19 pandemic.

Kennedy's anti-vaccine beliefs predate the emergence of Covid-19 by several years, but he had redoubled his efforts over the past two years, claiming that President Joe Biden's Chief Medical Advisor Dr. Anthony Fauci and Microsoft founder Bill Gates have conspired with the pharmaceutical industry in order to profit from the production of vaccines.

He recently faced widespread criticism for a remark during an anti-vaccine rally in Washington when he compared vaccine mandates introduced during the pandemic to the plight of Holocaust victim Anne Frank.

"Even in Hitler’s Germany, you could cross the Alps to Switzerland. You could hide in an attic, like Anne Frank did," Kennedy told the rally.

He later apologized for the remark after facing an onslaught of criticism from human rights organizations.

"The atrocities that millions endured during the Holocaust should never be compared to anyone or anything. His opinions are not a reflection of my own," Hines said on Instagram about 20 minutes after Kennedy tweeted an apology for the remark.

His sister Kerry also condemned his remarks on Twitter at the time, describing the speech as "sickening and repulsive".

"Bobby’s lies and fear-mongering yesterday were both sickening and repulsive. I strongly condemn him for his hateful rhetoric."

"He was an extraordinary older brother," Kerry Kennedy said in an interview at the end of February.

"He’s brilliant, he’s well-read, he cares deeply, he is extremely charismatic. He has a childlike buoyancy and lightness to him. He’s a beautiful person in a million different ways.

Blake Fleetwood, a writer who has been Kennedy's friend since 1971, said Kennedy was "risking his whole life of activism" with his anti-vaccine rhetoric.

"Why is he blowing his whole life’s work?" Fleetwood said in an interview with the New York Times.

Christopher Kennedy also condemned Robert for invoking Anne Frank during the anti-vaccine rally in Washington at the end of January, stating that he "couldn't disagree with him more".

Rory Kennedy also criticized her brother for his stance on vaccines in February, while his siblings Kathleen and Joseph P. Kennedy II and his niece Maeve Kennedy McKean condemned Robert's vaccine beliefs in a 2019 op-ed for Politico.

"We love Bobby. He is one of the great champions of the environment. His work to clean up the Hudson River and his tireless advocacy against multinational organizations who have polluted our waterways and endangered families has positively affected the lives of countless Americans. We stand behind him in his ongoing fight to protect our environment. However, on vaccines he is wrong," the three Kennedy family members said in the 2019 op-ed.

Robert F. Kennedy Jr. told the New York Times that he was drawn to anti-vaccine activism after he was contacted by several mothers "of intellectually disabled children who believed their kids were vaccine injured".

Prior to his emergence as one of the leading anti-vaccine voices in the US, Kennedy was renowned for his tireless environmental activism. His brother Douglas described him as the most politically-gifted child of former US Senator Robert F. Kennedy.

Douglas Kennedy said his brother "probably has the most natural political talent of not only everybody in our family in this generation but anybody I have ever met. Most of the time he is motivated to use those talents for good purpose".