With a family name and political legacy to protect, it's time Irish America and the Kennedy family responded to Robert F. Kennedy, Jr's lamentable exploits. 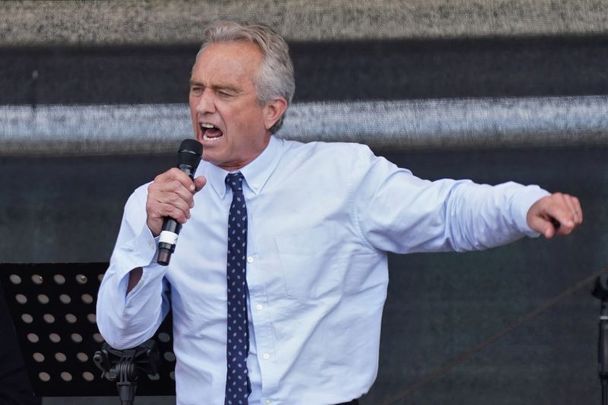 August 29, 2020: Robert F. Kennedy Jr., speaks to people from a wide spectrum, including coronavirus skeptics, conspiracy enthusiasts, right-wing extremists, religious conservatives, hippies and others gathered under the Victory Column in the city center to hear speeches during a protest against coronavirus-related restrictions and government policy in Berlin, Germany. City authorities had banned the planned protest, citing the flouting of social distancing by participants in a similar march that drew at least 17,000 people a few weeks ago, but a court overturned the ban. Getty Images

We need to have a talk about Robert F. Kennedy, Jr.

It's the kind of awkward personal discussion Irish families prefer to avoid, but he's out there making a holy show of himself in public

With a family name and political legacy to protect, it's time Irish America and the Kennedy family responded to his lamentable exploits.

At a rally on the steps of the Lincoln Memorial in Washington D.C. on January 23, Kennedy Jr., who in recent years has become a well so-called anti-vaccination crank, compared Dr. Anthony Fauci to the Nazi war criminal Josef Mengele. He then compared the government recommendation that you protect yourself with a Covid-19 vaccination shot to an edict more suited to Germany under the Nazis.

“Even in Hitler's Germany, you could cross the Alps into Switzerland. You could hide in an attic, like Anne Frank did,” he told the crowd on January 23. “I visited, in 1962, East Germany with my father and met people who had climbed the wall and escaped, so it was possible. Many died, true, but it was possible.”

At the antivaxx rally in DC, RFK Jr. says that in the future "none of us can run and none of us can hide" because of Bill Gates' satellites and also 5G, unlike... the Holocaust.

"Even in Hitler's Germany, you could hide in the attic like Anne Frank did." pic.twitter.com/bRtmDBTxZl

The government-mandated vaccines for federal workers were also blocked by a federal judge in Texas last week. This is all very far from encroaching medical fascism.

Nevertheless, goaded by Kennedy Jr's lamentable comments, the Auschwitz Memorial took to social media to declare, “Exploiting of the tragedy of people who suffered, were humiliated, tortured and murdered by the totalitarian regime of Nazi Germany - including children like Anne Frank - in a debate about vaccines and limitations during global pandemic is a sad symptom of moral and intellectual decay.”

Exploiting of the tragedy of people who suffered, were humiliated, tortured & murdered by the totalitarian regime of Nazi Germany - including children like Anne Frank - in a debate about vaccines & limitations during global pandemic is a sad symptom of moral & intellectual decay.

If the foundation that commemorates the Holocaust is condemning you for exploiting the tragedy, that should be your first solid clue that you have taken the wrong path.

Kennedy Jr. was undeterred, however, as were the many protestors who offensively wore yellow Star of David badges crafted to resemble the ones that the Nazis once pinned to their Jewish captives.

Some demonstrators are using holocaust imagery, including Star of David armbands, to liken vaccine mandates to the way Jews were treated in Nazi Germany. pic.twitter.com/AtCsYIQG84

An old law of politics says the weaker the cause, the more overheated the rhetoric. Kennedy went on to call the mandates “a coup d’etat to democracy” and compared vaccine passports to slavery, finding even more groups to offend in the process.

But then Kennedy Jr.'s rhetoric delved into the realms of science fiction. “Within in five years, we're going to see 415,000 low-orbit satellites,” he told the crowd. “Bill Gates says his 65,000 satellites alone will be able to look at every square inch of the planet 24 hours a day. They're putting in 5G to harvest our data and control our behavior. Digital currency that will allow them to punish us from a distance and cut off our food supply.”

Not all of the Kennedys have been content to sit silent as Kennedy Jr. fulminates publicly. “I love my uncle Bobby,” Kennedy Jr.’s niece Kerry Meltzer, a doctor who recently wrote in an opinion piece about her uncle’s growing standing in the online world of anti-vaccine science. “But when it comes to vaccines, he is wrong.”

via ⁦@Follownytopini1⁩ Read Dr. Kerry Kennedy Meltzer’s (my niece and namesake )excellent op-Ed in today’s NYT. And, get your vaccine, for yourself, your family, your friends, and your country. https://t.co/ZomKftPxk3

You can say that again, and the wider Kennedy family probably should, loudly and repeatedly, right now. Meltzer's uncle already has senior membership of the so-called “Disinformation Dozen,” the name given by health experts to the biggest spreaders of Covid-19 hoaxes and conspiracies.

His public participation in these kook-fests has made RFK Jr a pariah in the same Washington circles that his family members once dominated. So the call is coming from inside the house.